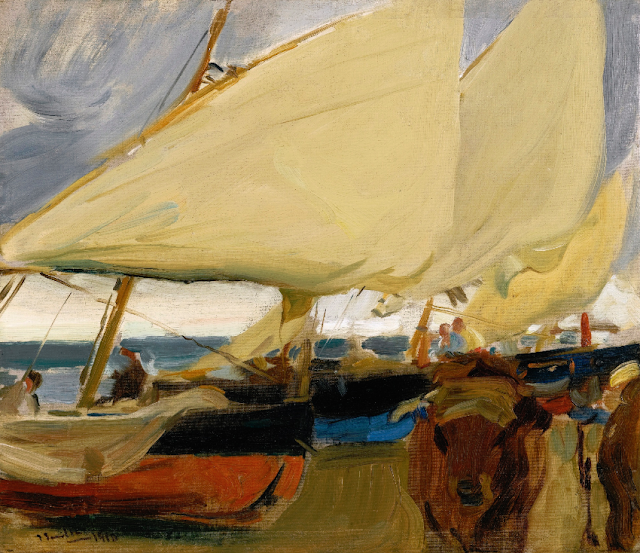 Valencia is one of the oldest cities in Spain, founded in the Roman period under the name (Valentia Edetanorum es) on the site of a former Iberian town, by the river Turia in the province of Edetania,  fronting the Gulf of Valencia on the Mediterranean Sea. More

Joaquín Sorolla y Bastida (27 February 1863 – 10 August 1923) was a Spanish painter. Sorolla excelled in the painting of portraits, landscapes, and monumental works of social and historical themes. His most typical works are characterized by a dexterous representation of the people and landscape under the sunlight of his native land. More 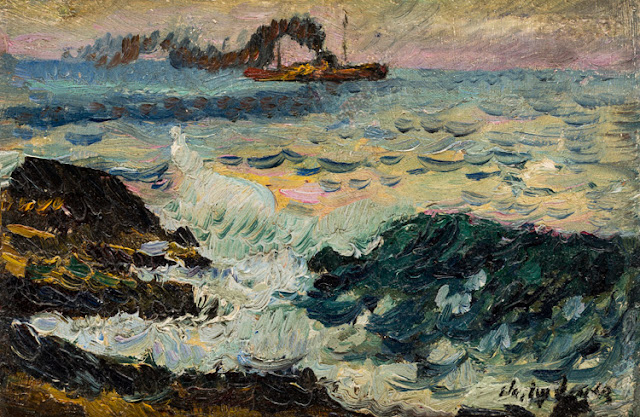 Richard Hayley Lever (28 September 1875 – 6 December 1958) was an Australian-American painter, etcher, lecturer and art teacher. He excelled in painting classes at Prince Alfred College under James Ashton and on leaving school continued to study under Ashton at his Norwood art school. He was a charter member of the Adelaide Easel Club in 1892.

Lever left to England in 1899 to further his career in painting. He moved to St. Ives, a fishing port and artistic colony on the Cornish coast. In St. Ives, Lever shared a studio with Frederick Waugh, and studied painting techniques under the Impressionists Olsson and Algernon Talmage. Lever also painted in the French port villages of Douarnenez and Concarneau, Brittany, directly across the English Channel from St. Ives. 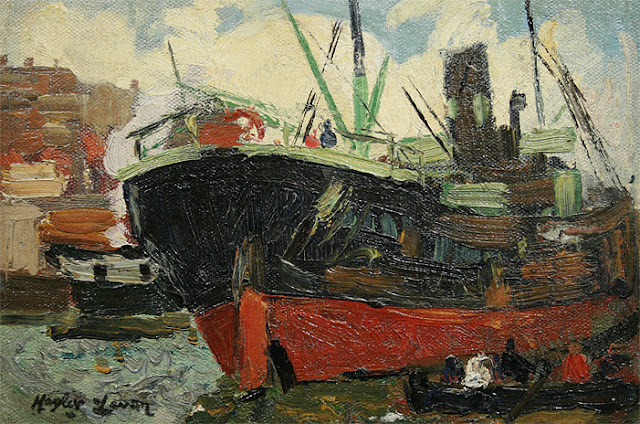 Lever arrived in New York City in 1912 and painted views of the Hudson River, Times Square and Central Park. Upon discovering the American east coast, he painted in Gloucester, MA for several summers and at Marblehead, MA. From 1919 to 1931, Lever taught art classes at the Art Students League of New York where he maintained a Gloucester studio and often traveled to paint on Nantucket and Martha's Vineyard. In 1924, Lever was commissioned to paint a portrait of the presidential yacht, Mayflower, which was subsequently presented to President Calvin Coolidge in the Cabinet Room of the White House.

In later life, Lever was inflicted with arthritis in his right hand, which prevented him from further travel and forced him to concentrate on still-life subjects instead. As his arthritis advanced, he taught himself to paint with his left hand. However, following the death of his wife Aida in 1949, Lever was confined to his home, where he continued to paint from 1953 until his death. More 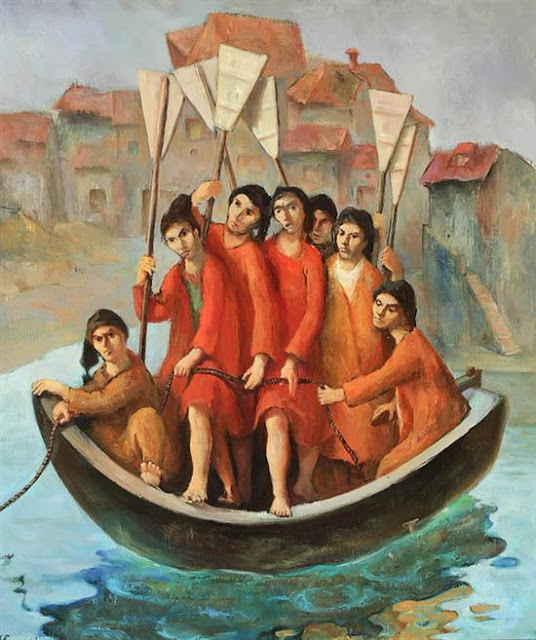 Bonifácio Lázaro Lozano ( Nazareth , 15 of February of 1906 - Madrid , 24 of April of 1999 ), was a Portuguese painter. He studied at the School of Arts and Crafts Setúbal and Lisbon in the Superior School of Fine Arts. Son of Spanish parents settled in Portugal and connected to the fish industry, Bonifácio Lázaro Lozano, an expressionist vein painter, devoted much of his work to the people of Nazareth (his homeland) and his constant struggle in the difficult chores sea and fishing. 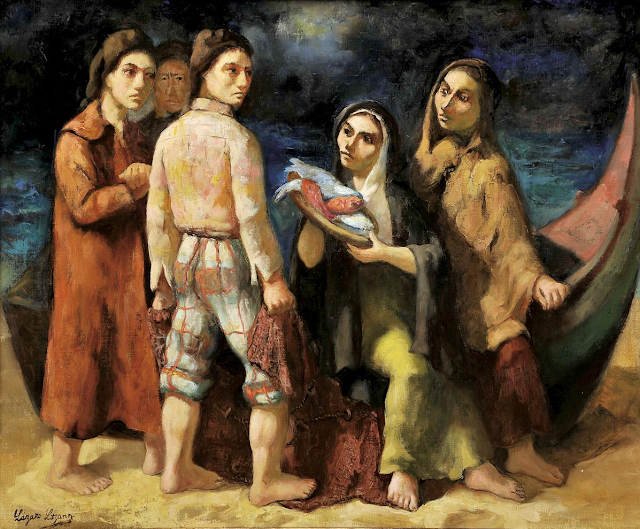 Lázaro Lozano completed his career at the San Fernando Academy of Fine Arts in Madrid. His work was recognized several times with awards and medals. His works is included in museums, such as Portugal, the Museum José Malhoa (Caldas da Rainha), the Museum of Nazareth, in the Chiado Museum (Lisbon), among others; the Columbus Museum, Georgia (USA). In the UK, University of Leeds. In Spain, Provincial Museum (Badajoz), Ministry of Foreign Affairs (Madrid). Africa; Museum of the City of Lourenço Marques and several private collections scattered throughout the world. More 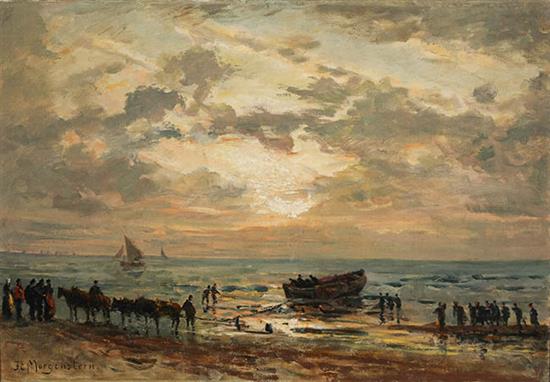 He also worked in his father's studio, and was inspired by the style of his father's oeuvre, which included landscapes and vedute. He undertook several study trips to Holland, Belgium, France, Italy, England and Scotland. Only after the death of his father, in 1893, did he manage to develop his own Impressionist style and artistic expression.

Friedrich Ernst Morgenstern did not immediately belong to the Kronberg painters' colony, but entertained friendly links with these artists in the Taunus region, just like his father and grandfather had gone to Kronberg before him. In 1919 Friedrich Ernst Morgenstern, the youngest and last representative of this Frankfurt dynasty of painters died in his home town.  More 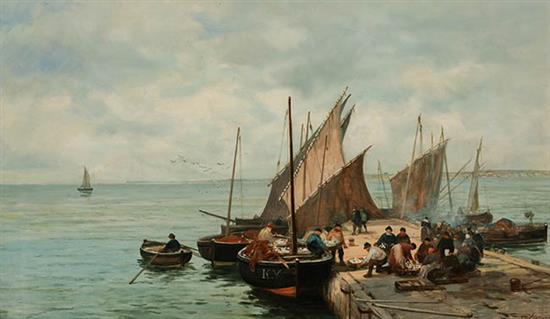 Alexander Young (British, 1865 - 1923) was born in 1865. Numerous works by the artist have been sold at auction, including 'Winter Afternoon' sold at Heffel 'Fall Auction of Fine Canadian Art' in 2008 for $614,773. There have been many articles about Alexander Young, including 'Heffel Auction: Harris and Carr on the block, with no record in sight' written by Murray Whyte for Toronto Star in 2016. The artist died in 1923. More 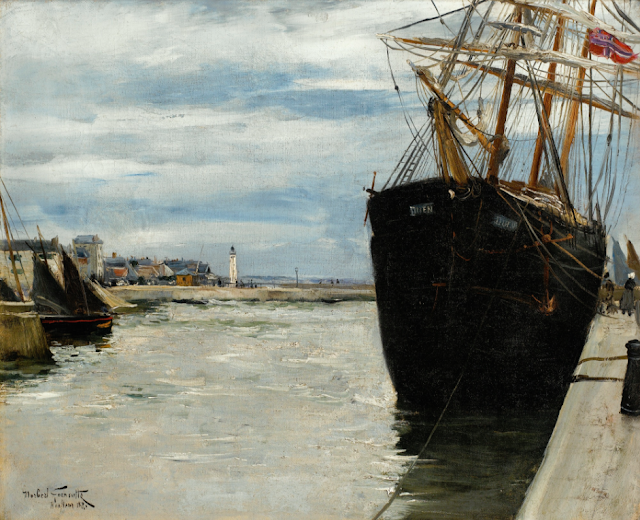 The Port of Honfleur, is the harbour of the Norman town of Honfleur, France. The port was originally founded by Vikings. Honfleur's ships skirted Newfoundland in search of cod, and its explorers sailed the shores of America seeking the elusive passage to the west. Expeditions to Quebec from this harbour led to its foundation.

The Port of Honfleur featured in dozens of Impressionist paintings. Following the example of local painter Eugène Boudin, artists poured in from Paris to paint Honfleur's ever-changing light, often against the backdrop of the great wood and slate houses that surround the ancient harbour.

He frequented the Père Lathuille, a famous cabaret, where he met Manet and was introduced to the artistic circle at the Café de la Nouvelle Athènes. He soon began exhibiting at the Salon but, despite his friendship with many notable Impressionists, never participated in one of their group exhibitions. In 1879, he married Eva Gonzalès, one of Manet's models. 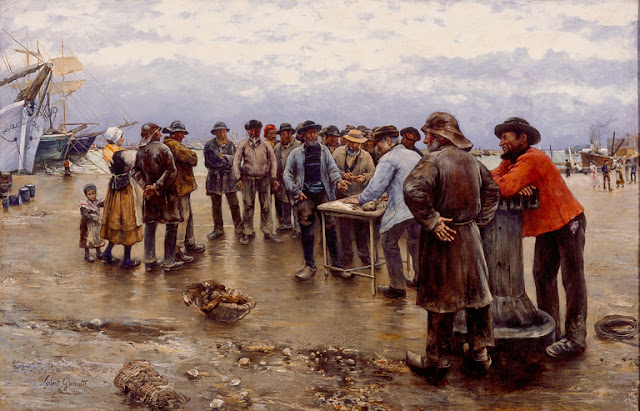 With the financial support of his brother, he frequently travelled abroad, including trips to London (1880) and Venice (1890). He also travelled extensively in France. These visits produced a multitude of landscapes and cityscapes. In 1889, he became one of the founders of the "Société des Peintres-graveurs Français", together with his friends Henri Guérard and Félix Bracquemond. That same year, he exhibited at the Exposition Universelle. Two years later, he found himself at odds with the Société when it refused admission to Camille Pissarro, who was not born in France.

In 1891, doctor Paul Gachet, an avid supporter of the arts and an amateur artist, diagnosed Goeneutte as having a weak heart and recommended that he settle in a rural area for his health. Gachet was able to find him a house near his own in Auvers-sur-Oise, called the "Villa Musette", where Goeneutte settled with his mother, his sister Reine and his brother Charles. Once there, he became involved with a group of artists associated with Charles-François Daubigny and did engraved illustrations together with Gachet. Three years later, he died of complications from what had turned out to be a lung disease. He is buried there, near the grave of Vincent van Gogh, who had also been treated by Gachet during his final illness. More 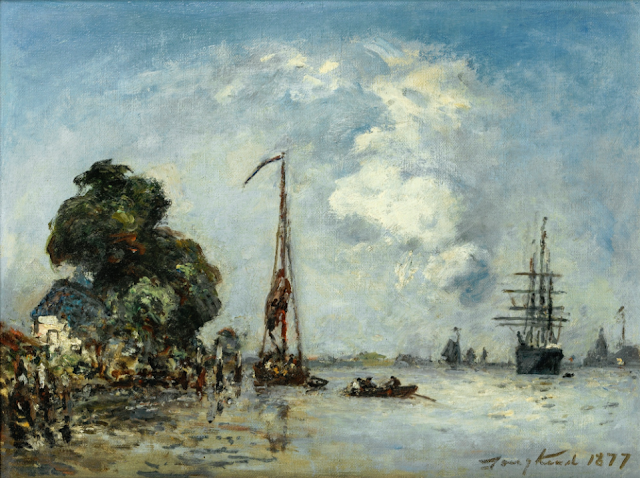 Johan Barthold Jongkind (3 June 1819 – 9 February 1891) was a Dutch painter and printmaker. He painted marine landscapes in a free manner and is regarded as a forerunner of Impressionism. Jongkind was born in the Netherlands. Trained at the art academy in The Hague, in 1846 he moved to Montparnasse in Paris, France where he studied under Eugène Isabey and François-Édouard Picot. Two years later, the Paris Salon accepted his work for its exhibition, and he received acclaim from critic Charles Baudelaire and later on from Émile Zola. He was to experience little success, however, and he suffered bouts of depression complicated by alcoholism. 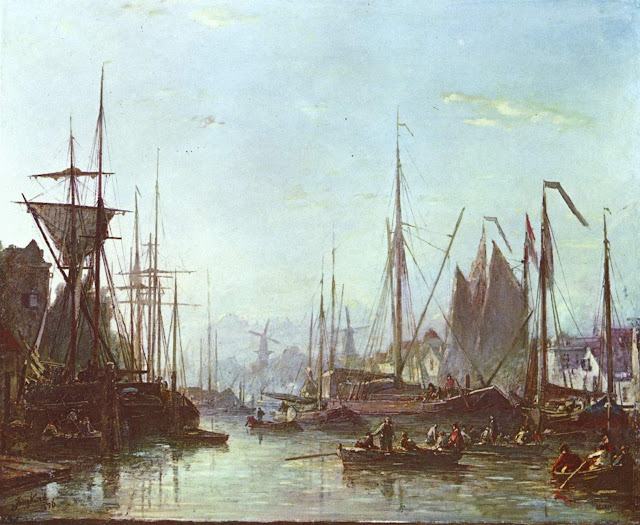 Jongkind returned to live in Rotterdam in 1855, and remained there until 1860. Back in Paris, in 1861 he rented a studio on the rue de Chevreuse in Montparnasse where some of his paintings began to show glimpses of the Impressionist style to come. In 1862 he met in Normandy, in the famous ferme Saint-Siméon in Honfleur, with some of his artist friends, such as Alfred Sisley, Eugène Boudin, and the young Claude Monet, to all of whom Jongkind served as a mentor. Monet later referred to him as "...a quiet man with such a talent that is beyond words" and credited the "definitive education" of his own eye to Jongkind. In 1863 Jongkind exhibited at the first Salon des Refusés. He was invited to participate in the first exhibition of the Impressionist group in 1874, but he declined. He died in 1891 in Saint-Égrève. More 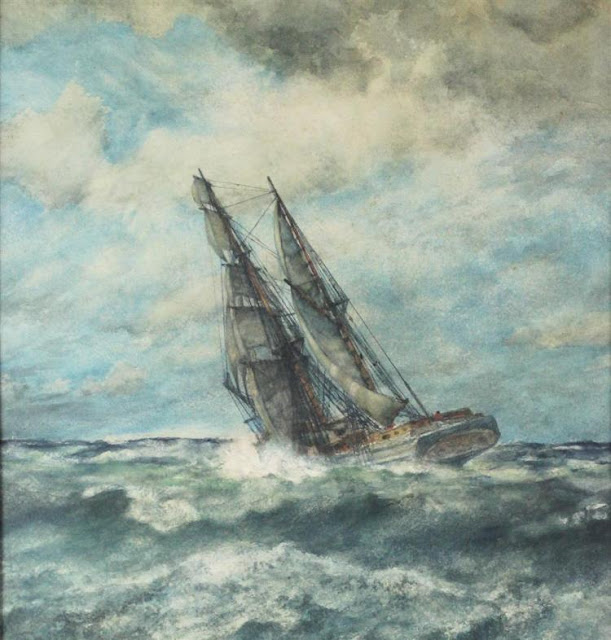 
Colman was a pupil of Asher Durand in New York City and from 1860 to 1862 studied in Spain, Italy, France, and England. In 1871–76 he was again in Europe. With James D. Smillie, he founded the American Water Color Society (1866), becoming its first president. His own watercolour paintings are particularly fine. He was elected a member of the National Academy of Design in 1862. Among his works are “The Ships of the Western Plains” and “The Spanish Peaks, Colorado.” More 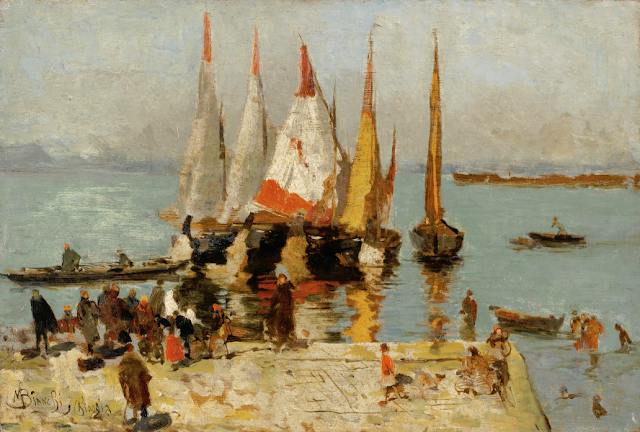 
Mosè Bianchi (Monza, 1840–1904) was an Italian painter and printmaker. Bianchi enrolled at the Brera Academy. Having interrupted his studies to serve in the second war of independence, he returned to attend the school of painting directed by Giuseppe Bertini.


The award of a grant in 1867 enabled him to visit Venice and then Paris in 1869. He took part with some success at the Brera exhibitions and the Vienna Exhibition of 1873. It was in this period that he began to paint genre scenes in 18th-century settings and numerous portraits, soon becoming one of the artists most in demand with the Milanese middle classes. He returned to Venice in 1879 and visited Chioggia for the first time. Both places were to be featured also in later years in a series of intense views exhibited at exhibitions in Milan and Venice alongside genre scenes, views of Milan and landscapes of the countryside around Gignese. More 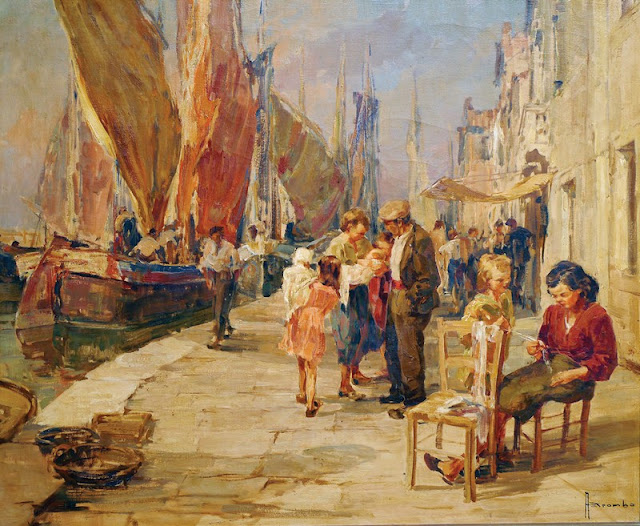 Angelo Brombo (Chioggia 1893 - Venice 1962). Angelo's vocation to become a painter comes from his  father Eugenio, who kept his shop under the arcades in Vena fondamenta in the district of Santa Maria where he worked until 1940.

From 1925 to 1929 Angelo taught design at the School of Applied Art in Chioggia. His debut was in a exhibition was in 1922 when he participates in a collective in Chioggia. In 1926/27 he was invited to the maritime art exhibition in Rome.

Since 1927 he took part in numerous solo and group exhibitions in Italy and abroad. Among these are the Opera Bevilacqua La Masa, 1930, 31, 32 and an exhibition at the Napoleon hall of the Palazzo Reale in Venice with over fifty works in 1945.

In 1944 he moved with his family to Venice where he continued painting until his death in 1962. More

Images are copyright of their respective owners, assignees or others
Posted by Henry Zaidan at 3:41 PM