10 Paintings, The Pre-Raphaelite Artists, with footnotes! 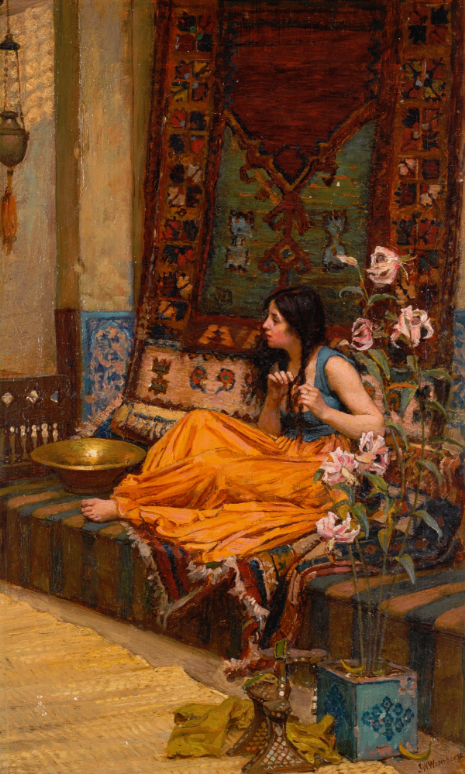 John William Waterhouse (April 6, 1849 – February 10, 1917) was an English painter known for working in the Pre-Raphaelite style. He worked several decades after the breakup of the Pre-Raphaelite Brotherhood, which had seen its heyday in the mid-nineteenth century, leading to his sobriquet "the modern Pre-Raphaelite". Borrowing stylistic influences not only from the earlier Pre-Raphaelites but also from his contemporaries, the Impressionists, his artworks were known for their depictions of women from both ancient Greek mythology and Arthurian legend.


Born in Italy to English parents who were both painters, he later moved to London, where he enrolled in the Royal Academy of Art. He soon began exhibiting at their annual summer exhibitions, focusing on the creation of large canvas works depicting scenes from the daily life and mythology of ancient Greece. Later on in his career he came to embrace the Pre-Raphaelite style of painting despite the fact that it had gone out of fashion in the British art scene several decades before. More on John William Waterhouse Rosamund Clifford (before 1150 – ca. 1176), often called "The Fair Rosamund" or the "Rose of the World", was famed for her beauty and was a mistress of King Henry II of England, famous in English folklore. 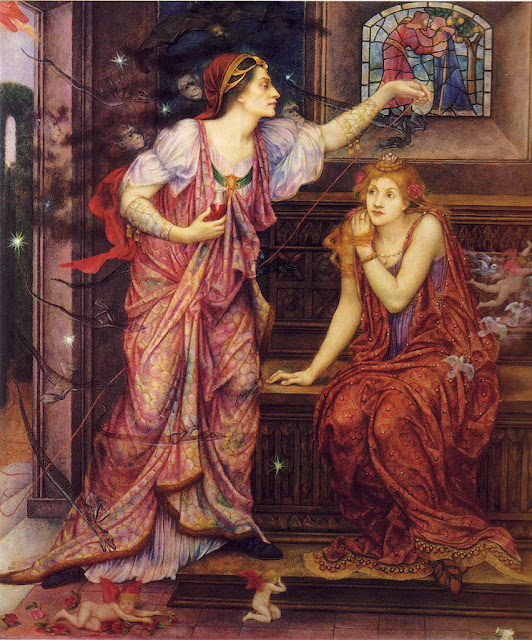 The traditional story recounts that King Henry adopted her as his mistress, and that, in order to conceal his illicit amours from his Queen, Eleanor of Aquitaine, he conducted them within the innermost recesses of a complicated maze which he caused to be made in his park at Woodstock, Oxfordshire. Rumours having reached the ears of Queen Eleanor, the indignant lady contrived to penetrate the labyrinth, confronted her terrified and tearful rival, and forced her to choose between the dagger and the bowl of poison; Rosamund chose the latter and died. More on this painting

We can see here the arrival of Queen Eleanor, as the maze is behind her through the open door. The Queen also carries a small flask of poison as well as the thread. The malicious character of Queen Eleanor can be seen in the presence of the shadowy evil forms that she brings. This contrasts to the figure of Rosamund who is accompanied by winged cherubs and doves. Blood red roses are at the feet of Queen Eleanor, whilst white roses, symbolising innocence, lie at Rosamund's feet.

However, this story has been suggested to be historically inaccurate, as Rosamund died in a nunnery when Queen Eleanor was being kept prisoner in Winchester. More on this painting

Evelyn De Morgan (30 August 1855 – 2 May 1919) was an English painter whose works were influenced by the style of the Pre-Raphaelite movement. Her paintings exhibit spirituality; use of mythological, biblical, and literary themes; the role of women; light and darkness as metaphors; life and death; and allegories of war.

In 5 March 1887, Evelyn married the ceramicist William De Morgan. They spent their lives together in London. De Morgan, a pacifist, expressed her horror at the First World War and the South African War in over fifteen war paintings including The Red Cross and S.O.S.

Relative to artistic pursuits, money was unimportant to the De Morgans; any profits from sales of Evelyn's paintings went toward financing William’s pottery business and she actively contributed ideas to his ceramics designs. More on Evelyn De Morgan

Pharaoh's Daughter appears to depict the un-named heroine of Exodus who discovered the infant Moses among the bulrushes when she was fetching water from the Nile. It was a popular subject in the nineteenth century. More on this painting 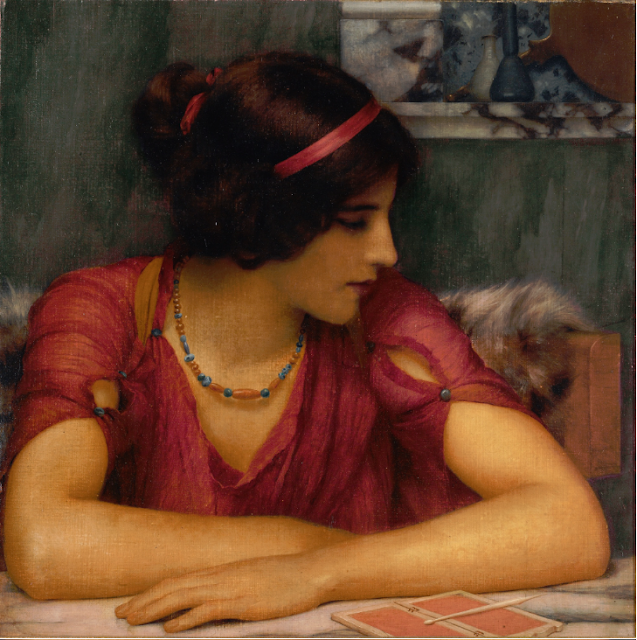 John William Godward (9 August 1861 – 13 December 1922) was an English painter from the end of the Neo-Classicist era. He was a protégé of Sir Lawrence Alma-Tadema, but his style of painting fell out of favour with the arrival of painters such as Picasso. He committed suicide at the age of 61 and is said to have written in his suicide note that "the world is not big enough for myself and a Picasso".

His already estranged family, who had disapproved of his becoming an artist, were ashamed of his suicide and burned his papers. No photographs of Godward are known to survive. More on John William Godward 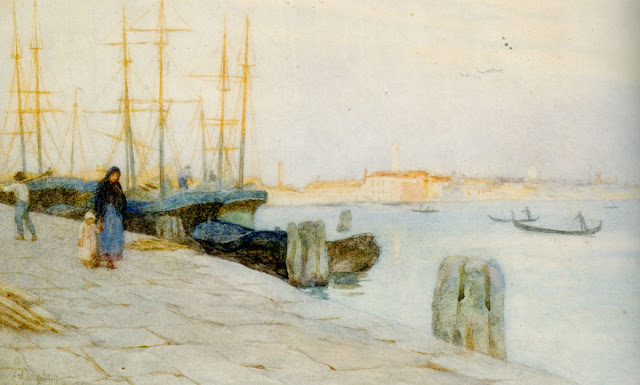 Helen Allingham (26 September 1848 – 28 September 1926) was an English watercolour painter and illustrator of the Victorian era. Paterson showed a talent for art from an early age, drawing some of her inspiration from her maternal grandmother Sarah Smith Herford and aunt Laura Herford, both accomplished artists of their day. From 1867 she attended the National Art Training School in London, which had a separate division for women; her aunt Laura Herford had previously studied there. The School is presently the Royal College of Art. 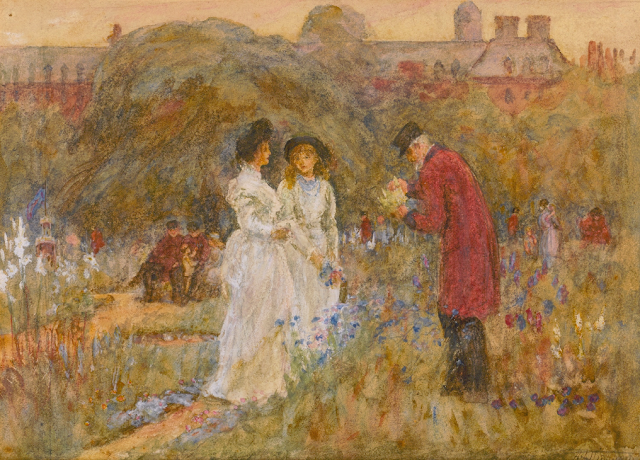 While studying at the National Art Training School, Paterson worked as an illustrator, eventually deciding to give up her studies in favour of a full-time career in art. One highlight was her commission to provide twelve illustrations for the 1874 serialisation of Thomas Hardy's novel Far from the Madding Crowd in Cornhill Magazine.

After her marriage in 1874, she gave up her career as an illustrator and turned to watercolour painting. In 1881 the family moved to Witley in Surrey. Helen started to paint the beautiful countryside around her and particularly the picturesque farmhouses and cottages of Surrey and Sussex for which she became famous. More on Helen Allingham

William Lionel Wyllie ((London 5 July 1851 – 6 April 1931 London) was a prolific English painter of maritime themes, in both oils and watercolours. He has been described as "the most distinguished marine artist of his day."

From the early 1870s Wyllie worked as an illustrator of maritime subjects. In 1875 the Academy rejected two of his works, and in anger he declared his intention to give up art for a career at sea. Over the course of several sailing cruises as far afield as Europe he laid the foundations for a lifelong love of the sea and of maritime subjects.

Wyllie campaigned vigorously for the restoration of HMS Victory as a founder member of the Society for Nautical Research, and in 1930 his 42-foot (13 m) panorama of the Battle of Trafalgar was unveiled by King George V.

In 1906, when he moved to Portsmouth, he became closely associated with the Royal Navy. So much so, indeed, that he was buried with full naval honours in 1931. In a moving ceremony, reminiscent of Nelson’s state funeral in 1806, his body was rowed up Portsmouth Harbour in a naval cutter past battleships with dipped colours and bugles calling and quaysides lined with dockyard worker. More on William Lionel Wyllie