Ludwig Deutsch (Vienna, 1855 - Paris, 1935) was an Austrian painter who settled in Paris. He studied at the Vienna Academy of Fine Arts 1872-1875, then, in 1878, moved to Paris where he became strongly associated with Orientalism. He was on good terms with another Austrian Orientalist in Paris, Rudolf Ernst. More 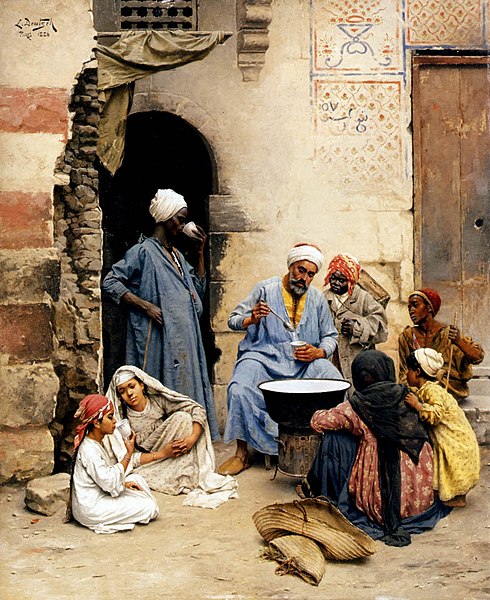 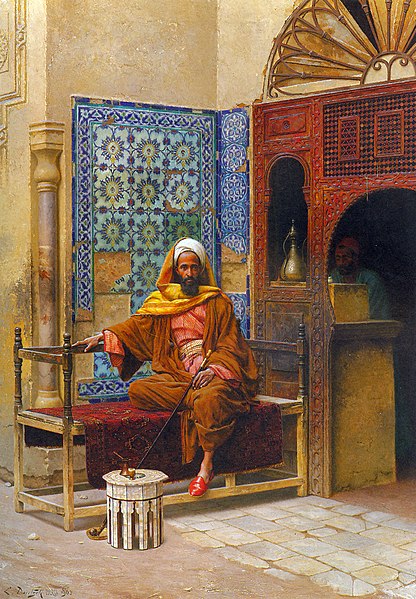 Standing in front of an arch that closely resembles the architecture of the Alhambra in Spain, the Moorish chief exudes power and mystery. This painting was probably shown at the Paris Salon exhibition of 1878 with the title Le Gardien du serail (The Harem Guard). More

Eduard Charlemont (1848–1906) was an Austrian painter, born in Vienna, capital of the Austrian Empire in 1848. His father, Matthias Adolf Charlemont, was also a painter, specializing in painting miniature portraits. His younger brother Hugo Charlemont (1850–1939) was an equally famous impressionist painter. At the age of fifteen Charlemont exhibited his works for the first time at the Academy of Fine Arts Vienna, where he studied fine arts. At the same age Eduard Charlemont was also hired by a girls' school to teach drawing.

After graduating from the Academy of Fine Arts Vienna, Charlemont traveled to many countries in central Europe and finally settled in Paris, where he lived for the next thirty years. In Paris, several times he won the first prize of the Paris Salon, an annual exhibition held by the French Academy of Fine Arts (French: Académie des Beaux-Arts).[1] The most famous work of Charlemont is The Guardian of the Seraglio, widely known as The Moorish Chief, depicting a Moorish swordsman guarding a seraglio (part of a typical wealthy Arabic villa, where women stayed when strangers entered the house). In 1899 he won the gold medal at the Exposition Universelle, a World's Fair held in Paris. Charlemont was also known for his murals. He painted three of the murals of the Burgtheater (the Austrian National Theatre in Vienna and one of the most important German language theatres in the world) totaling a length of about 55 meters. He died in Vienna in 1906.


Today, reproductions of his painting The Moorish Chief are the best-selling items in the museum store of the Philadelphia Museum of Art. More Rudolf Ernst (14 February 1854, Vienna - 1932, Fontenay-aux-Roses) was an Austro-French painter, printmaker and ceramics painter who is best known for his orientalist motifs. He exhibited in Paris under the name "Rodolphe Ernst".

He was the son of an architect and, encouraged by his father, began studies at the Academy of Fine Arts Vienna at the age of fifteen. He spent some time in Rome, copying the old masters, and continued his lessons in Vienna with August Eisenmenger and Anselm Feuerbach.

In 1876, he settled in Paris. The following year, he participated in his first artists' salon. He later made trips to Spain, Morocco, Egypt and Istanbul to study and document what he saw there.


In 1905, he moved to Fontenay-aux-Roses where he set up a shop to produce faience tiles with orientalist themes. He decorated his home in Ottoman style and lived a reclusive life. His exact date of death was apparently not recorded. More

Vernet was born to Carle Vernet, another famous painter, who was himself a son of Claude Joseph Vernet. He was born in the Paris Louvre, while his parents were staying there during the French Revolution. Vernet quickly developed a disdain for the high-minded seriousness of academic French art influenced by Classicism, and decided to paint subjects taken mostly from contemporary culture. Therefore, he began depicting the French soldier in a more familiar, vernacular manner rather than in an idealized, Davidian fashion. Some of his paintings that represent French soldiers in a more direct, less idealizing style, include Dog of the Regiment, Trumpeter's Horse, and Death of Poniatowski.

He gained recognition during the Bourbon Restoration for a series of battle paintings commissioned by the duc d'Orleans, the future King Louis-Philippe. Critics marvelled at the incredible speed with which he painted.[2] Many of his paintings made during this early phase of his career were "noted for their historical accuracy as well as their charged landscapes."[3] Examples of paintings in this style include the Battle of Valmy, the Battle of Jemappes, and the Battle of Montmirail.

Over the course of his long career, Horace Vernet was honoured with dozens of important commissions. King Louis-Philippe was one of his most prolific patrons.[2] His depictions of Algerian battles, such as the Capture of the Smahla and the Capture of Constantine, were well-received, as they were vivid depictions of the French army in the heat of battle. After the fall of the July Monarchy during the Revolution of 1848, Vernet discovered a new patron in Napoléon III of France. He continued to paint representations of the heroic French army during the Second Empire and maintained his commitment to representing war in an accessible and realistic way. He accompanied the French Army during the Crimean War, producing several paintings, including one of the Battle of the Alma, which was not as well received as his earlier paintings. One well known and possibly apocryphal anecdote maintains that when Vernet was asked to remove a certain obnoxious general from one of his paintings, he replied, "I am a painter of history, sire, and I will not violate the truth," hence demonstrating his fidelity to representing war truthfully.


Vernet died in his hometown of Paris in 1863. More


Images are copyright of their respective owners, assignees or others.
Posted by Henry Zaidan at 9:49 AM