William Lee Hankey (1869–1952) RWS,RI,ROI,RE,NS was a British painter and book illustrator. He specialised in landscapes, character studies and portraits of pastoral life, particularly in studies of mothers with young children.

He was born in Chester and worked as a designer after leaving school. He studied art in the evenings at the Chester School of Art. Later in Paris he became influenced by the work of Jules Bastien-Lepage, who also favoured rustic scenes depicted in a realistic but sentimental style. He first exhibited at the Royal Academy in 1896 and was President of the London Sketch Club from 1902 to 1904. He stayed in France in the early 1900s, painting many of his works in Brittany and Normandy, where he depicted a peasant lifestyle which was already disappearing in England. From 1904 until well after World War I he maintained a studio at the Etaples art colony.

Writing in The Studio,  A. L. Baldry commented that “He is in his water-colours an absolute purist; he paints entirely with transparent pigments, and never has recourse to opaque colours; his brushwork is broad and confident – free, on the one hand, from affectation of showy cleverness, and, on the other, from niggling minuteness or over-elaboration; and he does not insist, as is the fashion with many present-day painters, upon lowness of tone.” His French paintings include land- and seascapes such as "The Harbour at Étaples" and the distant view of the town in Auckland Art Gallery and figure studies like "Mother and Child" and The Goose Girl (below) 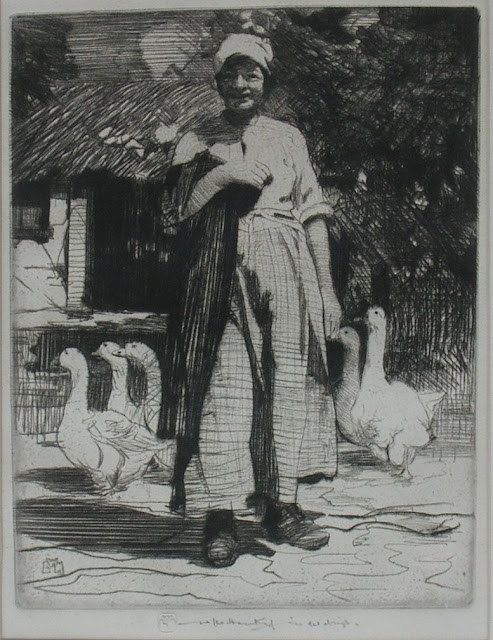 But it was Hankey's black and white and coloured etchings of the people of Étaples, several developed from these paintings, which gained him a reputation as 'one of the most gifted of the figurative printmakers working in original drypoint during the first thirty years of the 20th century'. One that is particularly striking for its stylistic presentation was "The Refugees" (above), his contribution to raising awareness of the consequences for ordinary people of the German invasion of France and Belgium in 1914. He went on to serve with the Artists' Rifles from 1915 to 1918.


In Britain he had been associated with the Newlyn School, a group of English artists based in the titular village in Cornwall who were themselves influenced by the romantic poets such as Wordsworth and Keats.

This style of touching depiction of a French peasant woman with her children was to become a recurring theme throughout William Lee-Hankey’s work - a theme in which he remained unsurpassed throughout the British Etching Revival.

This drypoint was adapted from William Lee-Hankey’s own oil painting of the subject which had been purchased by the French government for the Luxembourg, from the Salon of 1914. William Lee-Hankey had already issued an edition of 15 proofs in the first state of this plate when the subject was still relatively sketchy. In this second state (the edition of which was also limited to only 15 impressions) Lee-Hankey has completed the composition with much additional drypoint work. In this finished state the modelling of the sitters is completed, their clothes are properly shaded and both the background and the mother’s shawl have become darkened.

Excellent impression with totally fresh drypoint burr and exceptional contrast. A particularly strong impression from the only edition of 100 signed proofs printed by the artist himself.

William Lee-Hankey was one of the most gifted of the figurative printmakers working in original drypoint during the first thirty years of the 20th century. His intense portrait studies of the local folk of Britanny display an emotive understanding which was acquired over many years amongst the people which they portray. Women of Étaples is the style of portrait which finds Lee-Hankey at his best – here, he has captured the differing emotions of two different generations of the same family, whilst expressing the bond of care which exists between them.

One of only 24 proofs projected by the artist – it is thought unlikely that this edition was ever printed in full. Excellent impression, printed by the artist himself in tones of green, pink and black inks. Signed and inscribed in pencil by William Lee-Hankey “24 Impressions. No.2”.

William Lee-Hankey’s rare colour prints were his ultimate experiments in printmaking technique. Often, he would build up a colour print by overprinting multiple colour plates, in the manner of a colour woodcut. For this print, Lee-Hankey has used a drypoint plate printed in warm brownish-black ink which he has then overprinted with a tonal aquatint plate inked in colours applied à la poupée, by hand. Clearly an experimental proof printing, the colours do not achieve perfect registration and have a tendency to overflow into one another.

The young peasant women of Normandy were a constant subject for William Lee-Hankey’s printed works. He visited the village of a Etaples regularly, recording its local people in his watercolours and original prints, time and time again. This image of a young French girl sitting nonchalantly in a doorway is typical of his works in this vein.

One of only 6 or 8 proofs printed in colours, inscribed by the artist in pencil “No.3 The Alhambra”. 15 proofs were printed in black ink alone.
Very good impression, printed in tones of blue, green, brown and black inks.

William Lee-Hankey was an innovative experimenter in colour printmaking techniques. He also experimented with various methods of aquatint and textile grounds, often blended, or used in conjunction with a bitten line, always in search of a fuller tonality. In this plate depicting the ancient Moorish palace of the Alhambra, in Spain, W.Lee-Hankey has combined the techniques of etching and aquatint printed with hand applied colours to produce a haunting moolit scene.

Superb impression with rich drypoint burr and strong contrast, from the only edition of 100 signed proofs, printed by the artist himself.

The Secret typifies the touching and expressive style of portrait which finds William Lee-Hankey at his most inspired. The little girl looks out of the picture as though she senses the viewer attempting to intrude upon a secret which she does not intend to share. This form of intimate subject became a recurring theme throughout William Lee-Hankey’s work – a theme in which he remained unsurpassed throughout the British Etching Revival.

William Lee-Hankey’s studies of adolescence are the finest of his printed works – here he has depicted the young Marie in pensive mood set against the fields and village of Étaples.

This charming portrait of a young French girl holds the record for any William Lee-Hankey print at auction (£2,049 including premium at Bonhams, London on 4th Dec.2002, lot 312, erroneously catalogued as Goose Girl) and along with Denise has always been one of William Lee-Hankey’s most sought-after original prints.

Hardie considered this to be one of the artist’s finest plates “but if the frail, wistful face and feeble frame that are so nobly rendered in that dim interior, be too melancholy, the eye can turn to the cheery patch-work of the quilt and rejoice in that little bit of drawing and technique which has almost turned black-and-white into a gay riot of colour”. In Fading Light, the artist’s technique of working directly onto his plate with his subject before him, has allowed him to express an unusual sympathy between his medium and his theme.

On cream wove paper, with full margins and deckle edge.

In the Doorway   1909
Original etching with drypoint.
Signed and numbered in pencil. Further signed with the artist’s blindstamp.
Ref: Hardie 56 i/ii
S 322 x 275 mm; P & I 202 x 201 mm
One of only 6 impressions printed in the first state of the plate, prior to the addition of aquatint.

Very rare early working proof impression, prior to the normal edition. Signed and inscribed by the artist in pencil “No.2”, indicating the second proof to be taken from the freshly worked plate. Etched on zinc, In the Doorway was converted into an aquatint for the published edition of only 25 proofs. Working proofs of William Lee-Hankey’s plates, such as this, are universally rare.

The Open Window   1923
Original drypoint.
Signed in pencil, and with the artist’s blindstamp.
Ref: Post Hardie.
S 322 x 275 mm; P & I 202 x 201 mm
Excellent impression with strong, fresh drypoint burr, from the only edition of 100 signed proofs printed by the artist himself. It seems likely that some accident may have befallen a large number of the impressions from this edition as this particular work by William Lee-Hankey is rarely seen today.

The Open Window is the style of moving portrait which finds William Lee-Hankey at his most inspired. The subject of ‘mother and child’ became a recurring theme throughout William Lee-Hankey’s work – a theme in which he remained unsurpassed throughout the British Etching Revival. In this acutely observed study, the artist has captured perfectly a quiet moment of contemplation as his sitter gazes through the open window - from which this image takes it title.

On coarse hand-made paper with full margins and deckle edge.

Although often thought to be a portrait of the priest of Étaples (the village seen in the background), the character depicted in this drypoint is in fact a local fisherman.

Le Matin displays perfectly the rapid flowing style of William Lee-Hankey’s later drypoint work. Here, the artist has demonstrated his outstanding ability in the drypoint medium to the full. Executed with remarkable speed and precision, there is an unposed spontaneity to this interior study which is further emphasised by the sparse surroundings of the room. There is a leisurely flourish to the manner in which Lee-Hankey has drawn the ruffled bedclothes shortly after his model has awoken.