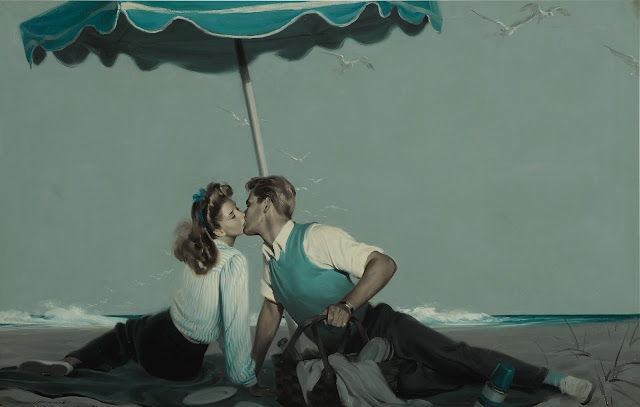 Robert George Harris was born September 9, 1911 in Kansas City, Missouri. Harris studied at the Kansas City Art Institute since the age of fourteen.

In 1933 he left Kansas City and drove a motorcycle all the way to New York City. He opened an art studio in New Rochelle at 560 Main Street.

In 1937 he was signed by American Artists Agency, which helped him to move up from the pulps to illustrating slick magazines. He worked for Cosmopolitan,Good Housekeeping, Ladies Home Journal, Liberty, McCall's, Redbook, and The Saturday Evening Post.

During WWII he volunteered to join the USO Artists For Freedom Project, which was organized by the NY Society of Illustrators to bring together over 200 artists to draw thousands of portrait sketches of wounded servicemen recuperating in military hospitals. Harris visited hospitals in New York, Connecticut, Virginia, and North Carolina.

In 1953 he moved to Scottsdale, Arizona, and continued to work as an illustrator until 1961, when he began to concentrate on a new career as a portrait artist.

In 1970 he moved to Carefree, Arizona, and continued to paint important portrait commmissions until his retirement in 1989.