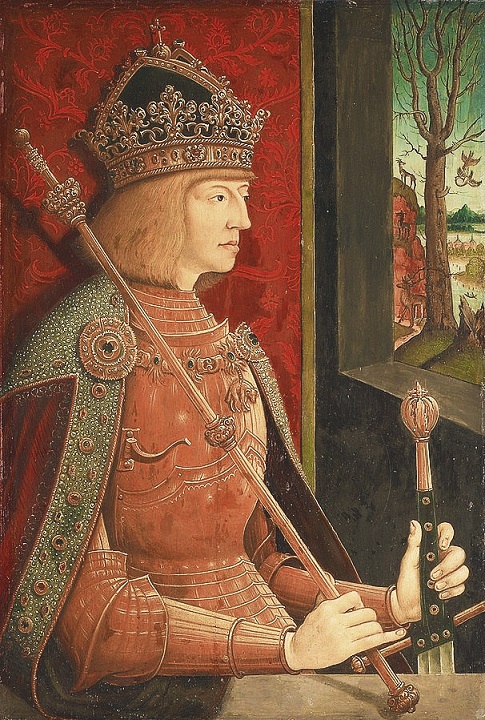 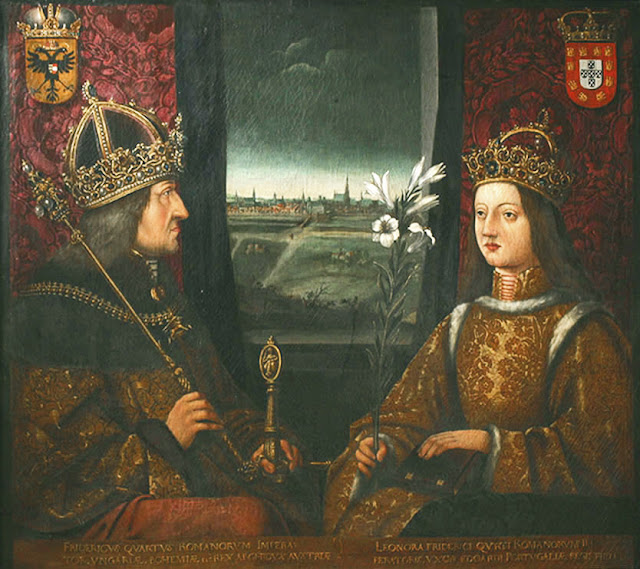 Although he was never crowned by the Pope, Maximilian became king of Germany in 1486 and emperor-elect in 1493, and he won papal approval as emperor in 1508. His talent, however, lay less in his success as emperor than in his securing the imperial title for the Hapsburg house and ensuring Hapsburg predominance in European diplomacy for the next 4 centuries. The empire had become by the end of the 15th century rather an aid to dynastic ambition than an effective form of government for Germany. Maximilian I's career was more an example of manipulating the advantages afforded by the imperial title than an actual rule of the fragmented empire. He was a better knight than he was a general, and he appears to have been far more a storybook king than a hardworking 15th-century monarch. He spent a great deal of time and money perpetuating his own memory, both in works and pictures about himself and in several romantic versions of his own life which he wrote. 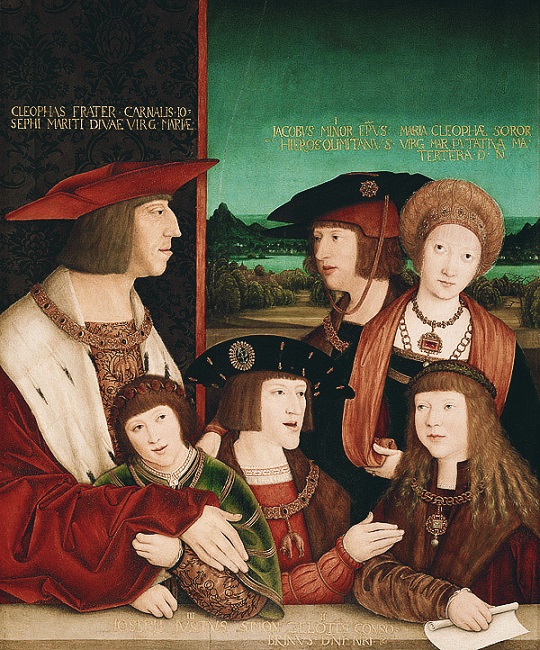 Bernhard Strigel  (1460–1528)
Portrait of Emperor Maximilian and his family
Oil on lime
Height: 72.8 cm (28.6 in); Width: 60.4 cm (23.7 in)
Kunsthistorisches Museum
Probably painted after the double wedding of Maximilian I's grandsons in Vienna in 1515 and the resulting connection between the Habsburgs and the Jagiellonian royal family. Depicted are Emperor Maximilian I and his first wife Maria von Burgundy (she had been dead for more than thirty years when the picture was taken), between them their son Philip the Fair, who died in 1506; in front Maximilian's grandsons, the later emperors Charles V (centre) and Ferdinand I (left), on the right Ludwig, heir to the kingdoms of Hungary and Bohemia. The naming of those portrayed as members of a branch of the Holy Family, namely Maria Cleophas, also dates from this time. In 1520 this panel, painted on both sides, was possibly in the possession of the imperial historiographer Johannes Cuspinian when he had himself and his family painted by Strigel as the third branch of the Holy Family (today Memmingen, museum). Furthermore, the connection between Cuspinian's family portrait, which is approximately the same size and designed in a similar way, and the Wiener Tafel remains unclear. More on this painting
Bernhard Strigel (c. 1461 – May 4, 1528) was a German portrait and historical painter of the Swabian school, the most important of a family of artists established at Memmingen. He was born at Memmingen and was probably a pupil of Zeitblom at Ulm. He stood in high favor with the Emperor Maximilian I, in whose service he repeatedly journeyed to Augsburg, Innsbruck, and Vienna.
His religious paintings, which include four altar wings with scenes from the "Life of the Virgin," in the Berlin Gallery, and 10 paintings illustrating the "Genealogy of Christ," in the Germanic Museum, Nuremberg, are historically interesting, but of less artistic value than his portraits, which, though detailed, are ably handled and luminous in color. More on Bernhard Strigel 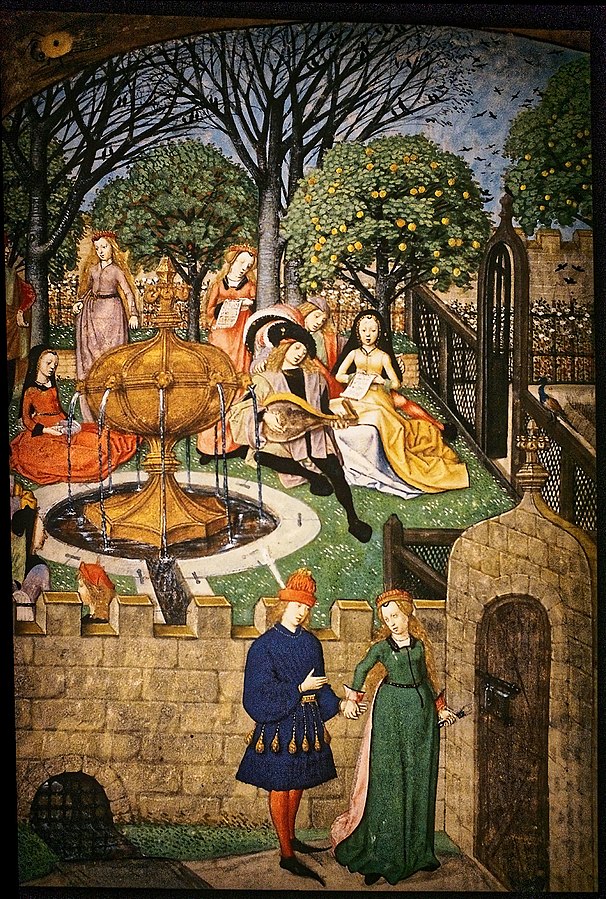 Unknown artist
Garden Scene with Maximilian and Mary of Burgundy
Der Weisskunig or The White King is a chivalric novel
Weisskunig, garden scene with Maximilian and Mary in Hortus conclusius. Maximilian wrote, "Had we but peace, we would sit here as in a rose garden."
Maximilian's marriage to Mary of Burgundy in 1477 plunged him into a conflict with the king of France, Louis XI, over the Burgundian territories. Holding his own against Louis, Maximilian also had to put down revolts in Flanders. His son and heir, Philip of Burgundy, was born in 1478, and his wife died in 1482. 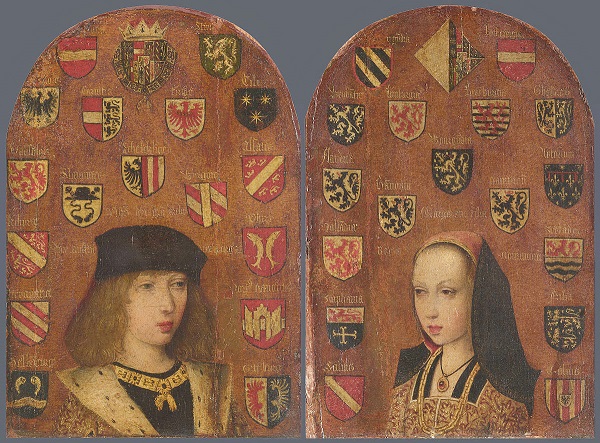 Probably Pieter van Coninxloo  (1460–1513)
Portrait of Philip I of Castile and Margaret of Austria, c. 1494
Oil on canvas
National Gallery
This teenage brother and sister were the heirs of royalty and future rulers themselves. Philip the Handsome and Margaret of Austria were the children of the Holy Roman Emperor, Maximilian I, and Mary of Burgundy. Each is identified by an inscription in gold above their head and by the coats of arms at the top of the arch. Around them are further coats of arms representing the states and towns their parents governed.
Philip (1478–1506), who was later King of Castile, wears the livery collar of the Order of the Golden Fleece – a prestigious chivalric order – which he received in 1481. Margaret (1480–1530) was to become one of the effective rulers of her day as regent of the Netherlands. This small diptych (a painting made up of two parts) was easily portable, and must have been done in the early 1490s, when various projects for Philip’s and Margaret’s marriages were matters of intense concern. More on this painting
Pieter van Coninxloo (c. 1460–1513) was an Early Netherlandish painter first documented as active in Brussels from 1479. Little is known of his life apart from his appearance in records of 1479, 1503 and 1513, in the archives of Margaret of Austria when he is mentioned in relation to the commission of portraits. He came from a family of artists; at least six generations were painters. His brother was Jan van Coninxloo.
He is sometimes associated with the unidentified artist known as the Master of the Legend of the Magdalen, thought to have been a court painter to Margaret of Austria, and who shares similarities of style, time and location. A number of art historians, including Max Friedländer, who first identified the Master of the Legend of the Magdalen, speculated that they may have been the same person. He may also have been a member of the master's workshop. More on Pieter van Coninxloo
Maximilian held his Burgundian dominions, and in 1496 married Philip to Juana, daughter of Ferdinand and Isabella of Spain, thus linking the Hapsburg house to the most vigorous dynasty of Europe. In 1500 the future emperor Charles V was born to Juana and Philip, and by a series of dynastic accidents Charles became the heir not only of Maximilian's Hapsburg territories and claim to the imperial title but to Burgundy and Spain as well, thus laying the foundations for the power of the Spanish monarchy for the next century. 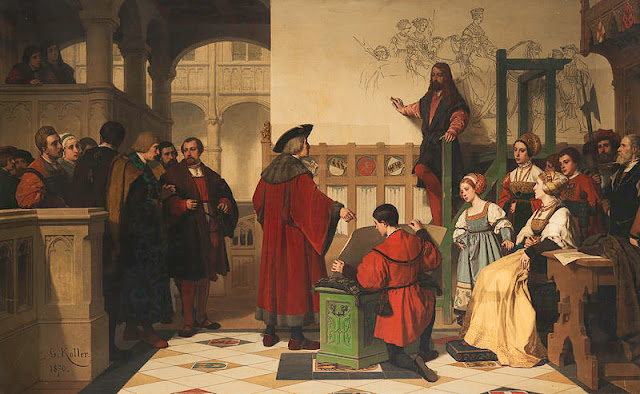 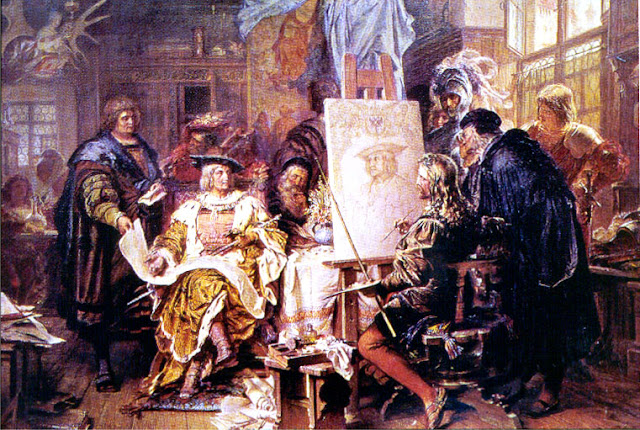 Carl Jäger
Portrait session in the workshop of Albrecht Dürer, between 1882 and 1886
Nuremberg Town Hall
Karl Jäger (17 October 1833 – 15 December 1887) was a German painter. Born in Nuremberg, Jäger studied at the Munich Academy and at the Academy of Applied Arts in Nuremberg, where he later taught drawing. Between 1882 and 1886 he painted his best-known work, Maximilian I with Albrecht Dürer for the Nuremberg town hall. He also helped to illustrate the works of Friedrich Schiller and created grisaille portraits of prominent personalities, including composers Beethoven and Haydn. More on Karl Jäger 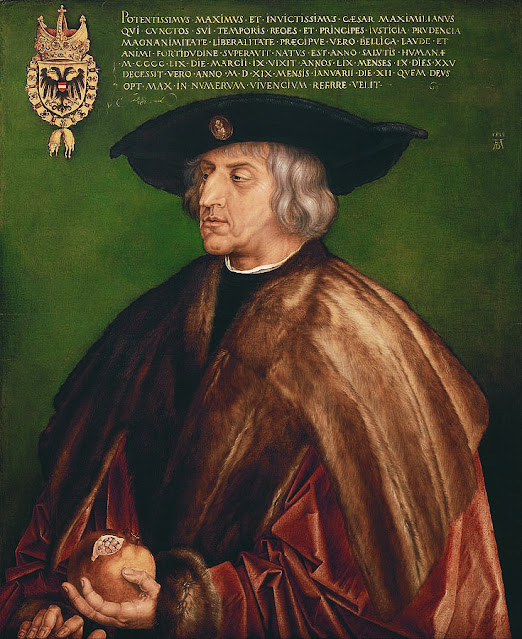 Albrecht Dürer  (1471–1528)
Portrait of Emperor Maximilian I, c. 1519
Oil paint, lime panel
Height: 74 cm (29.1 in); Width: 61.5 cm (24.2 in)
Kunsthistorisches Museum
Maximilian I was a learned ruler with a strong interest in the arts. Dürer first met him during a visit to Nuremberg in 1512 and was commissioned to work on the gigantic woodcuts of The Triumphal Arch and The Triumphal Procession, as well as decorations for Maximilian's prayer book. In 1515 he was awarded an annual payment of 100 florins by the Emperor.
On 28 June 1518 Dürer had sketched Maximilian during the Imperial Diet at Augsburg. He inscribed the drawing: `This is Emperor Maximilian, whom I, Albrecht Dürer, portrayed up in his small chamber in the tower at Augsburg on the Monday after the feast day of John the Baptist in the year 1518.' In the relatively informal sketch Dürer captured a hint of the fatigued resignation of the 59 year-old ruler.
Maxmilian I died on 12 January 1519 and Dürer then used his drawing as the basis for a woodcut and two painted portraits, one in tempera (Germanisches Nationalmuseum, Nuremberg) and this one in oil. These finished works are formal portraits and lack some of the human character which comes out in the original sketch. In the oil portrait, the Emperor is dressed in an elegant fur, which Dürer has painted with great care. Instead of an orb, the Emperor holds a broken pomegranate, a symbol of the Resurrection and Maximilian's personal emblem. At the top of the picture is the Habsburg coat of arms with the double-headed eagle and a lengthy inscription on Maximilian's achievements. The Emperor looks aloof and withdrawn, an expression of his dignity. More on this painting 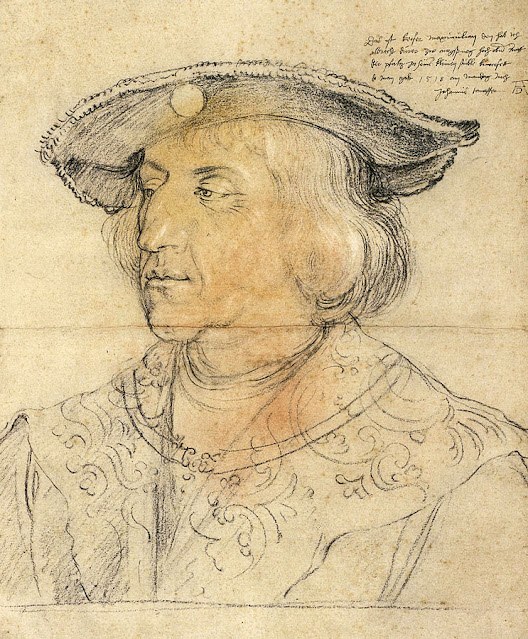 Albrecht Dürer  (1471–1528)
Portrait of Maximilian I of Habsburg, c. 28 June 1518
Charcoal and chalk on paper
Height: 381 mm (15 in); Width: 319 mm (12.55 in)
Albertina, Vienna, Austria
Albrecht Dürer (21 May 1471 – 6 April 1528) was a painter, printmaker and theorist of the German Renaissance. Born in Nuremberg, Dürer established his reputation and influence across Europe when he was still in his twenties, due to his high-quality woodcut prints. He was in communication with the major Italian artists of his time, including Raphael, Giovanni Bellini and Leonardo da Vinci, and from 1512 he was patronized by emperor Maximilian I.
His vast body of work includes engravings, his preferred technique in his later prints, altarpieces, portraits and self-portraits, watercolours and books. The woodcuts, such as the Apocalypse series (1498), retain a more Gothic flavour than the rest of his work. His well-known engravings include the Knight, Death, and the Devil (1513), Saint Jerome in his Study (1514) and Melencolia I (1514), which has been the subject of extensive analysis and interpretation. His watercolours also mark him as one of the first European landscape artists, while his ambitious woodcuts revolutionized the potential of that medium.
Dürer's introduction of classical motifs into Northern art, through his knowledge of Italian artists and German humanists, has secured his reputation as one of the most important figures of the Northern Renaissance. This is reinforced by his theoretical treatises, which involve principles of mathematics, perspective and ideal proportions. More on Albrecht Dürer
Maximilian's success in the dynastic marriage market was greater than his military and diplomatic success. He failed to defeat France on an abortive expedition to Italy in 1496 and was himself defeated by the Swiss in 1499 and outmaneuvered in Italy by Louis XII of France in 1500. Between 1500 and 1504 Maximilian was busy putting down rebellions in Germany, and after the death of his son Philip in 1506 the problems of the Netherlands regency were added to those of Germany and Italy. In 1508 Maximilian's expedition to Italy was stopped by Venetian resistance, and the Emperor retaliated by entering into the League of Cambrai with France and the papacy against Venice. In 1510, however, Pope Julius II reversed his policy and rejected the league, and from 1510 until his death Maximilian was faced with the rising power of France in Italy.

Besides external political threats, Maximilian faced the perennial administrative chaos of Germany and accomplished a number of governmental and judicial reforms, including the establishment of the Imperial Court in 1495, in which Roman law was to be used. Maximilian also urged reform of the Church, particularly in Germany. At his death in 1519 the crises which would trouble the 16th century were already evident: the rivalry between Spain and France, the use of Italy and the papacy as a battleground for the conflict, and the stirrings of anticlericalism and the questioning of ecclesiastical dogma which would usher in the Reformation. Maximilian's reputation as the "last knight" was a fitting one. More on Maximilian I