01 Painting, Streets of Paris, by the artists of their time, Georg Tappert's Café, Part 77 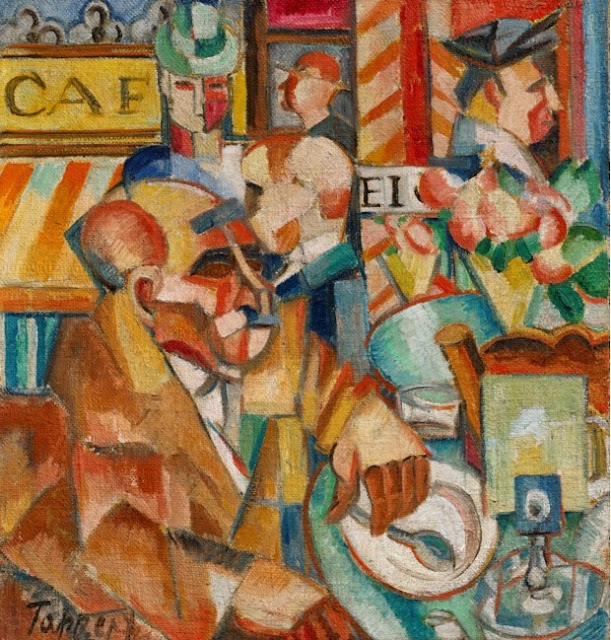 Georg Tappert (1880-1957)
Café, c. 1917
Oil on burlap
25 1⁄4 x 23 5⁄8 in. (64 x 60.8 cm.)
Private collection
Painted in 1917, Café is a fine example of Tappert's fascination with the subject of café society, which he explored throughout his career, and particularly in the years during the First World War. In taking up themes of the cabaret and the world of entertainment, Tappert reflects the influence of works by Pechstein and Van Dongen, who in turn drew their inspiration from French turn-of-the-century artists such as Toulouse-Lautrec.
Even though Georg Tappert served in the army during the war years, from 1915-1918, scenes of war and destruction are conspicuously absent from his œuvre. Instead, during this period Tappert's work is dominated by nudes and scenes of the demi-monde, and bourgeoise social life, such as the present painting. Unlike his contemporaries, who expressed war traumas and battle experiences through their art, Tappert found in painting a way of escaping the grim reality and creating a more pleasant imaginary world. More on this painting
Georg Tappert (20 October 1880, Berlin – 16 November 1957, Berlin) was a German expressionist painter.

Tappert underwent an apprenticeship as a tailor, before gaining employment at various tailoring businesses for two years. However he attracted the attention of Max Liebermann, who gave him a letter of introduction to Ludwig Schmid-Reutte a professor at the Academy of Fine Arts, Karlsruhe. He studied there from 1901 to 1906, whereupon he joined the Worpswede artists’ colony until 1909.

He was one of the founders of the New Secession which was formed in 1910 following 27 expressionist artworks being excluded from an exhibition organised by the Berlin Secession. More on Georg Tappert