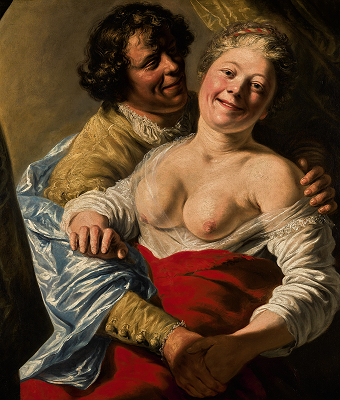 Jan Lievens (24 October 1607 – 4 June 1674) was a Dutch painter, usually associated with Rembrandt, working in a similar style. According to Arnold Houbraken, Jan was the son of a tapestry worker, and was trained by Joris Verschoten. He was sent to Pieter Lastman in Amsterdam at about the age of 10 for two full years. After that he began his career as an independent artist, at about the age of 12 in Leiden. He became something of a celebrity because of his talent at such a young age. This attracted the attention of Maurice of Nassau, Prince of Orange, around 1620, who bought a life-size painting of a young man reading by the light of a turf-fire. He gave this painting in turn to the English Ambassador, who presented it to James I. This was the reason why, when Lievens was 31, he was invited to the British court. When he returned from England he settled in Antwerp, where he married Suzanna Colyn de Nole, the daughter of the sculptor Michiel Colyns. In this period he won many commissions from royalty, mayors, and city halls.

Lievens collaborated and shared a studio with Rembrandt van Rijn from about 1626 to 1631. Their competitive collaboration, represented in some two dozen paintings, drawings and etchings, was intimate enough to cause difficulties in the attribution of works from this period. Lievens showed talent for painting in a life-size scale, and his dramatic compositions suggest the influence of the Caravaggisti. Lievens was more inventive, yet less expressive than Rembrandt. The two men split in 1631, when Rembrandt moved to Amsterdam and Lievens to England. In 1656 Rembrandt still owned paintings by his former friend.


During his time in England Lievens painted a portrait for Thomas Howard, 21st Earl of Arundel, and became influenced by the works of Anthony van Dyck. Lievens worked in Antwerp, and cooperated with Adriaen Brouwer. After being a court painter in The Hague and Berlin, he returned to Amsterdam in 1655. After his first wife died he married a sister of Jan de Bray in 1648. After 1672, the Rampjaar Lievens had increasing financial difficulties and his family voided all claims of inheritance on his death due to his debts. More on Jan Lievens


Please visit my other blogs: Art Collector, Mythology, Marine Art, Portrait of a Lady, The Orientalist, Art of the Nude and The Canals of Venice, Middle East Artists, and 365 Saints, also visit my Boards on Pinterest
Images are copyright of their respective owners, assignees or others. Some Images may be subject to copyright
I don't own any of these images - credit is always given when due unless it is unknown to me. if I post your images without your permission, please tell me.
I do not sell art, art prints, framed posters or reproductions. Ads are shown only to compensate the hosting expenses.
If you enjoyed this post, please share with friends and family.
Thank you for visiting my blog and also for liking its posts and pages.