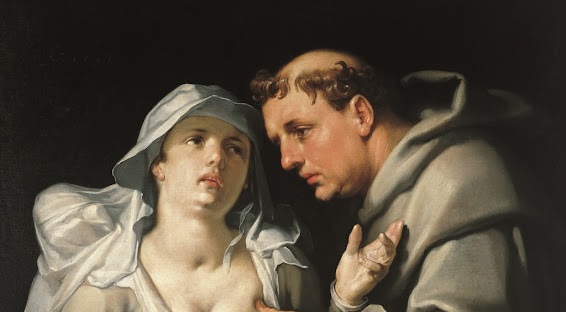 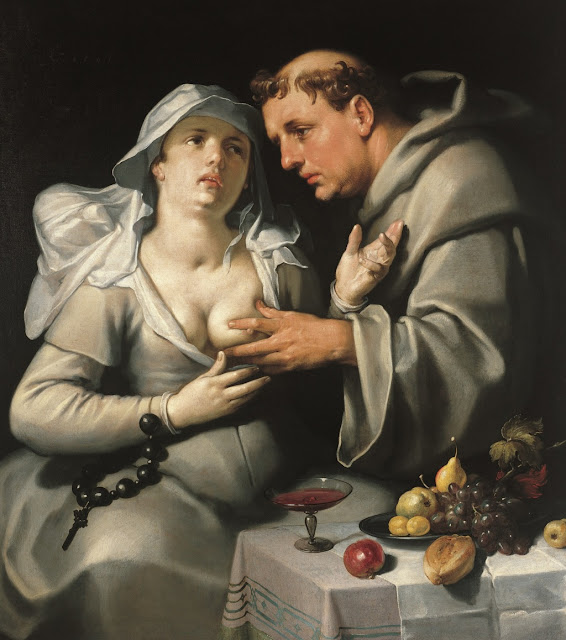 According to legend a nun was accused of having become pregnant. To verify this a monk had to squeeze her breast and if it produced milk she was guilty. But instead of milk she produced wine — the reason for the wine glass on the table. Instead of proving the nun’s guilt the miracle was witness to her faith. Yet the legend may not have been the real subject of the painting. Pictures of amorous monks and nuns were a popular genre in the late 16th century. This may in fact be a satire on the immorality of the cloisters and the Catholic Church. More on this work

Cornelis Corneliszoon van Haarlem (1562 – 11 November 1638), Dutch Golden Age painter and draughtsman, was one of the leading Northern Mannerist artists in the Netherlands, and an important forerunner of Frans Hals as a portraitist. He is known among art historians as a member of the Haarlem Mannerists. He painted mainly portraits as well as mythological and Biblical subjects. Initially Cornelis Cornelisz painted large-size, highly stylized works with Italianate nudes in twisted poses with a grotesque, unnatural anatomy. Later, his style changed to one based on the Netherlandish realist tradition.

When his parents fled Haarlem in 1568, as the Spanish army laid siege to the city during the Eighty Years' War, Cornelis Cornelisz remained behind and was raised by the painter Pieter Pietersz the Elder. Later, in 1580-1581 Corneliszoon studied in Rouen, France, and Antwerp, before returning to Haarlem, where he stayed the rest of his life. In 1583 he received his first official commission from the city of Haarlem, a militia company portrait, the Banquet of the Haarlem Civic Guard. He later became city painter of Haarlem and received numerous official commissions. As a portrait painter, both of groups and individuals, he was an important influence on Frans Hals. More Cornelis Corneliszoon van Haarlem