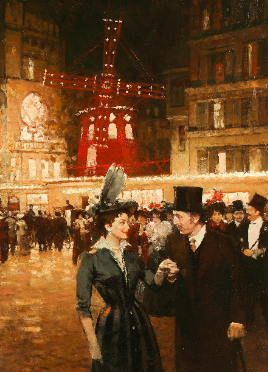 Moulin Rouge is a cabaret in Paris, France.
The original house, which burned down in 1915, was co-founded in 1889 by Charles Zidler and Joseph Oller, who also owned the Paris Olympia. Close to Montmartre in the Paris district of Pigalle on Boulevard de Clichy in the 18th arrondissement, it is marked by the red windmill on its roof. The closest métro station is Blanche.
Moulin Rouge is best known as the birthplace of the modern form of the can-can dance. Originally introduced as a seductive dance by the courtesans who operated from the site, the can-can dance revue evolved into a form of entertainment of its own and led to the introduction of cabarets across Europe. Today, the Moulin Rouge is a tourist attraction, offering musical dance entertainment for visitors from around the world. The club's decor still contains much of the romance of fin de siècle France. More on Moulin Rouge
Victor Guerrier, (French, 1893-1968)  was born and trained in Lyon living much of his life at Saint Cyr au Mont d’Or. He began his career as an illustrator but made his name painting Belle Epoque subjects and Parisian life between the wars.

Clearly inspired by the work of Impressionist masters such Manet and Toulouse-Lautrec his work captures and celebrates the diversity of life in Paris at the turn of the century; from the nightclubs of Montmartre to the cafés of the Champ-Elysses, Guerrier depicts French high society in its pomp. There is often a subtle narrative to the work, where a stolen glance speaks volumes. Further evidence of Manet’s work is evident in his figures, who often stare directly at the viewer, creating images that are, at once, engaging and arresting, while the fashions of the age are beautifully rendered with a vivid palette and deftly applied impasto.

Guerrier also worked in the Alps and Algeria producing a number of Orientalist subjects along with a series of paintings in St Paul de Vence. He exhibited at the Salon de Printemps. More on Victor Guerrier