01 Painting, Streets of Paris, by the artists of their time, Part 73 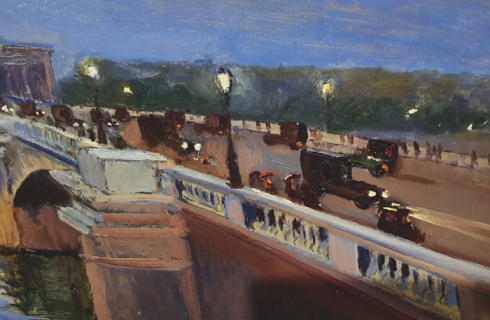 Attributed to Alfred Henry Maurer
La Pont De La Concorde and a View of The Palais Bourbon, Circa 1920
Oil on paper laid on board
14 x 21 inches
Private collection

Pont de la Concorde, stone-arch bridge crossing the Seine River in Paris at the Place de la Concorde. The masterpiece of Jean-Rodolphe Perronet, conceived in 1772, the bridge was not begun until 1787 because conservative officials found the design too daring. Perronet personally supervised construction despite his advanced age; he was 82 when the work was completed in 1791. The outbreak of the French Revolution scarcely affected progress; Perronet used the demolished Bastille as a source for masonry. The name of the bridge has been changed from Louis XV to Révolution to Concorde. More on Pont de la Concorde

Alfred Henry Maurer (April 21, 1868 – August 4, 1932) was born in New York City April 21, 1868. He was the son of German-born Louis Maurer, a lithographer with a pronounced disdain for modern art. At age sixteen, Maurer had to quit school to work at his father's lithographic firm. In 1897, after studying with the sculptor John Quincy Adams Ward and painter William Merritt Chase, Maurer left for Paris, where he stayed the next four years, joining a circle of American and French artists. Finding the instruction at the Academie Julian too limited, he spent most of his time copying in the Louvre.

Maurer  was a modernist painter. He exhibited his work in avant-garde circles internationally and in New York City during the early twentieth century. Highly respected today, his work met with little critical or commercial success in his lifetime, and he died, a suicide, at the age of sixty-four. More on Alfred Henry Maurer