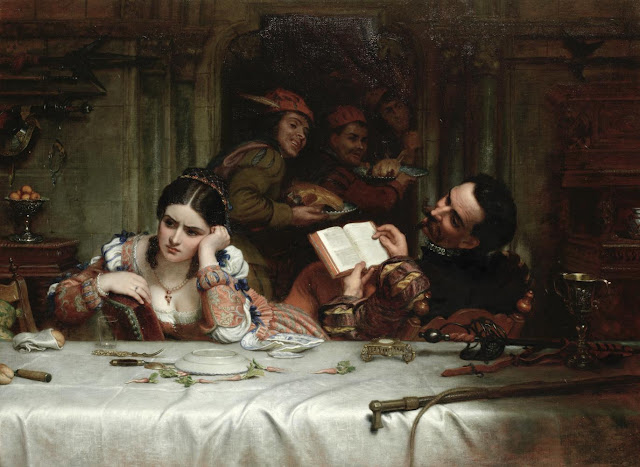 The Taming of the Shrew is a comedy by William Shakespeare, believed to have been written between 1590 and 1592.

The main plot depicts the courtship of Petruchio and Katherina, the headstrong, obdurate shrew. Initially, Katherina is an unwilling participant in the relationship; however, Petruchio "tames" her with various psychological torments, such as keeping her from eating and drinking, until she becomes a desirable, compliant, and obedient bride. More on The Taming of the Shrew

Charles West Cope RA (28 July 1811, in Leeds – 21 August 1890) was a student of the Royal Academy. He won a silver medal in 1829 from the Society of Arts, and medal from the Royal Academy Life School, and thus free classes for life.

In 1832 Charles West Cope went to Paris and honed his skill by reproducing the Old Masters at the Louvre. In 1833 his painting The Golden Age was exhibited at the Royal Academy for the first time. In September of that year, he went to Italy for two years, making a living by painting on commission.

Cope submitted designs for a competition to decorate the inside of the Houses of Parliament. In 1843, his preliminary drawing The First Trial by Jury earned him 300 pounds in prize money. The following year he presented another design called 'Meeting of Jacob and Rachel,' and was one of six painters commissioned in July of that year to prepare preliminary drawings for the decoration of the House of Lords. Cope received a commission to execute his design in fresco, and also another of Edward the Black Prince receiving the Order of the Garter. These commissions kept him busy painting fresco in the House of Lords for many years.

In 1848 he became a Royal Academician after exhibiting a large work Cardinal Wolsey's Reception at Leicester Abbey. In 1849 he traveled to Italy and Germany to improve his knowledge and technique of fresco painting. In 1867 he became a professor of painting at the Royal Academy. More on Charles West Cope


Please visit my other blogs: Art Collector, Mythology, Marine Art, Portrait of a Lady, The Orientalist, Art of the Nude and The Canals of Venice, Middle East Artists, and visit my Boards on Pinterest