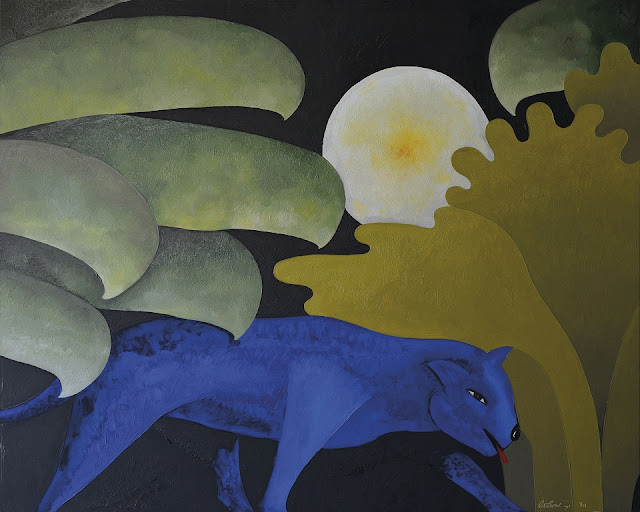 Willy Aractingi, (Lebanese, 1930-2003) was born in New York in 1930, Aractingi was raised in Cairo, studied in Grasse, before finally settling in Beirut in the late 1940s.
Aractingi undertook painting at a very young age. His works are often differentiated by his use of unique colour gradations, bold pigments and recurring use of nature.

Aractingi’s greatest artistic achievement was painting Jean de la Fontaine's (French, 1621 - 1695) entire collection of 244 fables on individual canvases. He embarked on this mamoth project titled Magnum Opus in January 1989, whilst residing in France. Seven years and 244 canvases later, he completed the ambitious project in 1995 on the 300th anniversary of De La Fontaine’s death.

Aractingi's works are extensively inspired by fictional stories and fables. He generously provides his audience a gateway into the creases of a fantasy world inhabited by folk creatures and copious animals; all brought to life using his vivid brushstrokes.  He continued to paint insistently up until his death in 2003; depicting Antar and Abla, Geha, Tarzan, Adam and Eve, and a plethora of animals throughout his oeuvre.  Following his death, the artist's family estate donated 230 of his works to the Sursock Museum in Beirut. In 2017, the museum mounted a retrospective curated by Yasmine Chemali who gathered some 120 works under the title Les Mondes de Willy Aractingi. Sotheby's is privileged to be offering this important and rare work from the estate of the artist. More on Willy Aractingi

Thank you for visiting my blog and also for liking its posts and pages.
Posted by Henry Zaidan at 10:44 AM