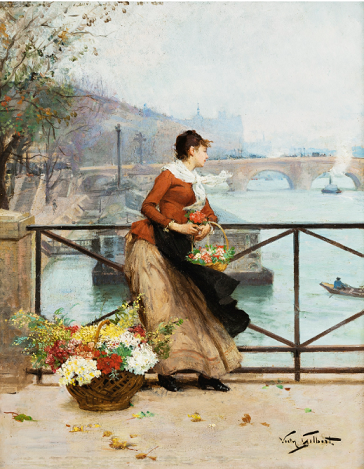 The Pont des Arts or Passerelle des Arts is a pedestrian bridge in Paris which crosses the River Seine. It links the Institut de France and the central square (cour carrée) of the Palais du Louvre, (which had been termed the "Palais des Arts" under the First French Empire); between 1802 and 1804, under the reign of Napoleon I

In 1976, the Inspector of Bridges and Causeways reported several deficiencies on the bridge. More specifically, he noted the damage that had been caused by two aerial bombardments sustained during World War I and World War II and the harm done from the multiple collisions caused by boats. The bridge would be closed to circulation in 1977 and, in 1979, suffered a 60-metre collapse after a barge rammed into it.

The present bridge was built between 1981 and 1984 "identically" according to the plans of Louis Arretche.

The bridge has sometimes served as a place for art exhibitions, and is today a studio en plein air for painters, artists and photographers. The Pont des Arts is also frequently a spot for picnics during the summer. More on The Pont des Arts


Victor Gabriel Gilbert born in Paris the 13 February 1847 and died in the 21 July 1933. He was a French painter. He is buried in Montmartre cemetery in Paris. In 1860 he apprenticed to a painter and decorator. He followed with evening art classes under the direction of Father Levasseur, the School of the City of Paris. In the late 1870s, his taste for naturalism is developed and he turned to genre painting with scenes of streets, cafes, markets, especially that of Halles . He obtained a second class medal at the Salon of 1880 and a silver medal at the 1889 World Fair . It becomes a member of the French Society of Artists in 1914.

Victor Gilbert was appointed Knight of the Legion of Honour in 1897, and received the Prix Léon Bonnat in 1926. More on Victor Gabriel Gilbert