01 Painting, Streets of Paris, by the artists of the time, Part 44 - With Footnotes 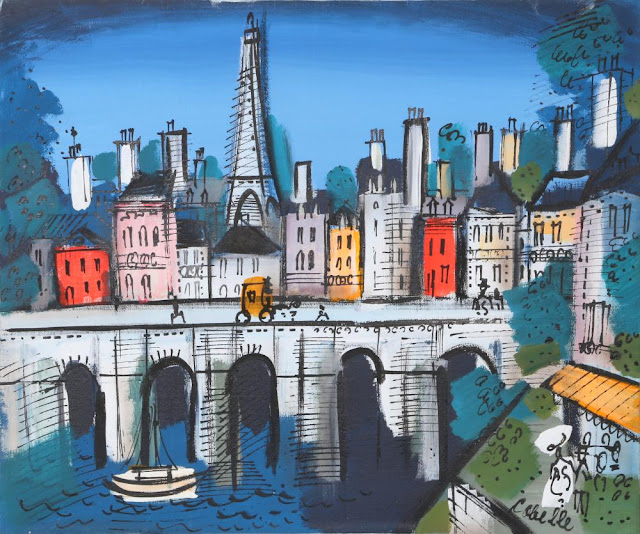 Charles Cobelle, born Carl Edelman (1902–1994) was a modern French master of painting, lithography and a fine muralist, who was born in Alsace-Lorraine, France. He is considered the last link to the great tradition of the Open Line School of Paris.

Cobelle received his Bachelor's and Master's Degrees from the University of Munich and continued his studies at the École des Beaux-Arts in Paris. Much more influential in his development, however, were his private studies with Marc Chagall and his apprenticeship in the studio of Raoul Dufy in Menton on the Riviera.

Cobelle lived and painted in Paris until the late 1920s and established himself within the great tradition of the School of Paris. In the late 1920s, Cobelle moved to the United States, where his paintings were immediately sought after by galleries and private collectors alike. Cobelle became a U.S. citizen before the outbreak of World War II.

By the 1950s, spurred by the commercial success of his mentor, Dufy, Cobelle had achieved phenomenal success commercially with his Parisian-influenced style. Much like contemporary artists and designers at the time, his designs graced a number of pottery patterns for various pottery companies.

In addition to creating advertising illustrations for everything from hosiery to French perfume, Cobelle created a number of murals throughout the country in noteworthy public locations such as The Painted Desert Room of the Desert Inn in Las Vegas, the Mark Hopkins Hotel in San Francisco, Neiman-Marcus in Dallas and on the cruise ships of the Holland America Line. More on Charles Cobelle


Please visit my other blogs: Art Collector, Mythology, Marine Art, Portrait of a Lady, The Orientalist, and The Canals of Venice, And visit my Boards on Pinterest