01 Paintings, Streets of Rome, 20th Century, by the Artists of the time, with footnotes. 3 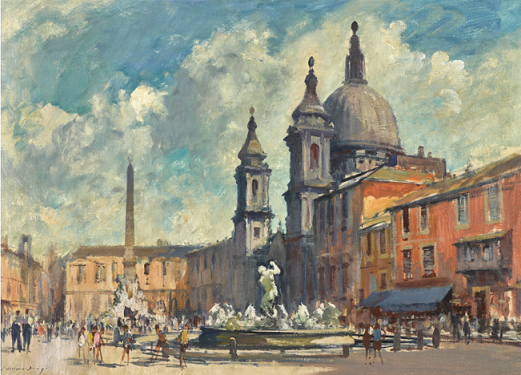 Piazza Navona is a square in Rome, Italy. It is built on the site of the Stadium of Domitian, built in the 1st century AD, and follows the form of the open space of the stadium. The ancient Romans went there to watch the games, and hence it was known as "Circus Agonalis". It is believed that over time the name changed to in avone to navone and eventually to navona.

Defined as a public space in the last years of 15th century, when the city market was transferred there from the Campidoglio, Piazza Navona was transformed into a highly significant example of Baroque Roman architecture and art during the pontificate of Innocent X, who reigned from 1644 until 1655, and whose family palace, the Palazzo Pamphili, faced the piazza.

During its history, the piazza has hosted theatrical events and other ephemeral activities. From 1652 until 1866, when the festival was suppressed, it was flooded on every Saturday and Sunday in August in elaborate celebrations of the Pamphilj family. The pavement level was raised in the 19th century, and in 1869 the market was moved to the nearby Campo de' Fiori. A Christmas market is held in the piazza square. More on Piazza Navona

Edward Brian Seago, 1910–1974; was a British painter, writer, and illustrator, born in Norwich. He was confined to bed for much of his childhood, had little formal education, and was mainly self-taught as an artist. From 1928 to 1933 he travelled with circuses in Britain and abroad, and he wrote three illustrated books on the circus in the 1930s. However, he became best known for landscapes and portraits.

During the Second World War he served as a camouflage officer and after being invalided from the army in 1944 he was invited by Field Marshal Alexander to paint scenes of the Italian campaign in 1945. In 1953 he was appointed an official Coronation artist and in 1956–7 he accompanied the Duke of Edinburgh on a world tour.  More Seago