07 Paintings, of The amorous game, Part 3 - With Footnotes 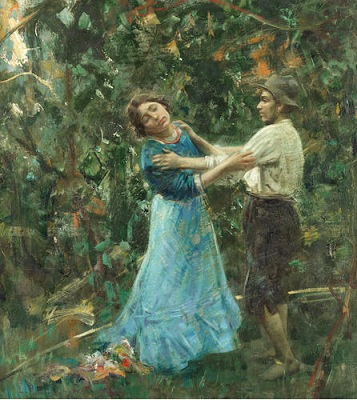 Luca Postiglione (Naples, October 18, 1876 – 1936) was an Italian painter, mainly of portraits, and historic and genre subjects, in a Realist style.

He was the son of the painter Luigi Postiglione. His elder brother, Salvatore Postiglione was also a painter and his teacher. Luigi's uncle, Raffaele (1818–1897) was a professor at the Neapolitan Institute of Fine Arts. 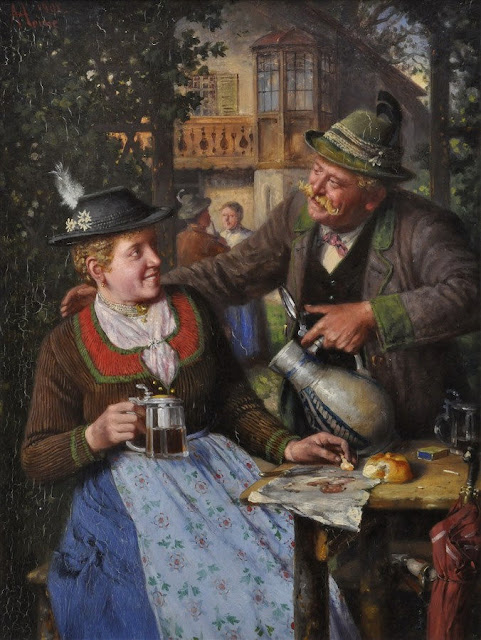 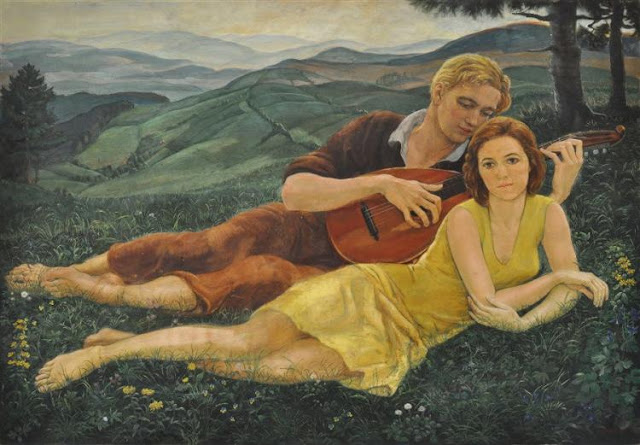 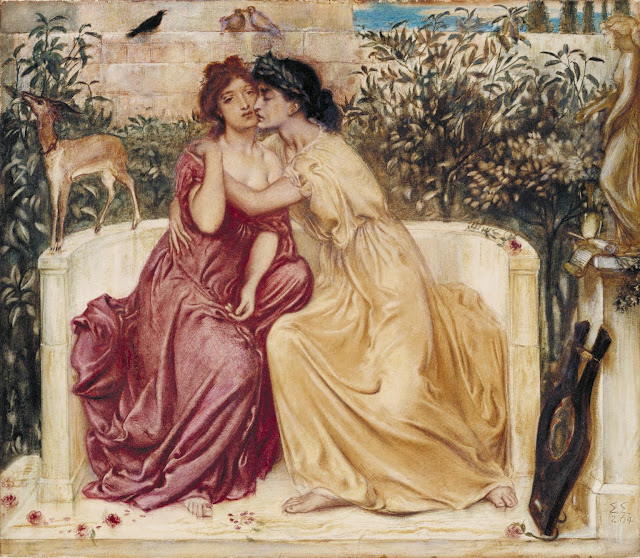 The picture depicts Sappho embracing her fellow poet Erinna in a garden at Mytilene on the island of Lesbos. Sappho was born at Lesbos in about 612BC. After a period of exile in Sicily she returned to the island and was at the centre of a community of young women devoted to Aphrodite and the Muses. Although Solomon believed Erinna to have been part of this community, we now know that she lived not on Lesbos, but on the Dorian island of Télos, and slightly later than Sappho, at the end of the 4th Century BC. Sappho wrote nine books of poetry, of which only fragments survive. The principal subject of her work is the joy and frustration of love and the most complete surviving poem is an invocation to the goddess Aphrodite to help her in her relationship with a woman. More Sappho and Erinna

Simeon Solomon (9 October 1840 – 14 August 1905) was an English Pre-Raphaelite painter noted for his depictions of Jewish life and same-sex desire. Born and educated in London, Solomon started receiving lessons in painting from his older brother around 1850. He started attending Carey's Art Academy in 1852. His older sister first exhibited her works at the Royal Academy during the same year.

In 1873 his career was cut short when he was arrested and charged with attempting to commit sodomy: he was fined £100. He was arrested again in 1874 in Paris, after which he was sentenced to spend three months in prison.

After his prosecutions he no longer exhibited, but achieved a degree of celebrity amongst those who shared his sensibilities: Oscar Wilde, John Addington Symonds, Count Eric Stenbock, and Walter Pater all collected his works.

In 1884 he was admitted to the workhouse where he continued to produce work, but his life and talent were blighted by alcoholism. Twenty years later in 1905, he died from complications brought on by his alcoholism. More Simeon Solomon 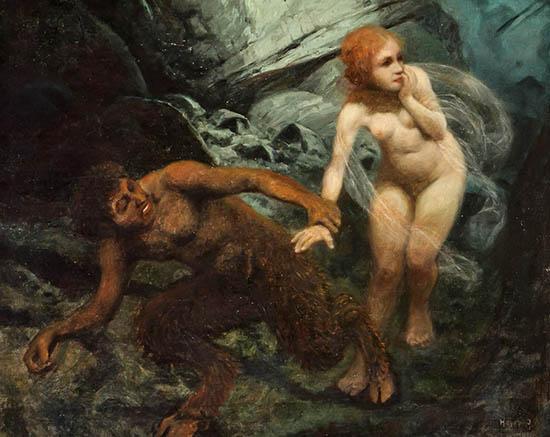 On the basis of his artistic talents, he attended, from 1890 to 1895, Unterrichtsanstalt des Kunstgewerbemuseums Berlin. During this period, he published his first drawings in various newspapers. In 1892 and 1895, he conducted study trips to Transylvania, where he came into contact with the local Hungarian culture. In 1896, he moved to Budapest and earned his living with book illustrations. In 1900, he became a naturalized Hungarian citizen, then part of the Austro-Hungarian Empire. In 1906, he held his first exhibition in Budapest, followed by numerous others. In 1909, he had two exhibitions in Thuringia, the Grand Ducal Museum in Weimar and the Kunstverein Gotha. In 1911, he received the Hungarian Count Andrássy Prize. After several exhibitions, including at the Vienna Künstlerhaus and the Glaspalast in Munich, he was appointed professor there in 1915. In 1929, the Hungarian National Museum in Budapest acquired his self-portrait. In 1931, he died in Budapest at the age of 59 and received a state funeral at Kerepesi Cemetery. More on Arthur Heyer 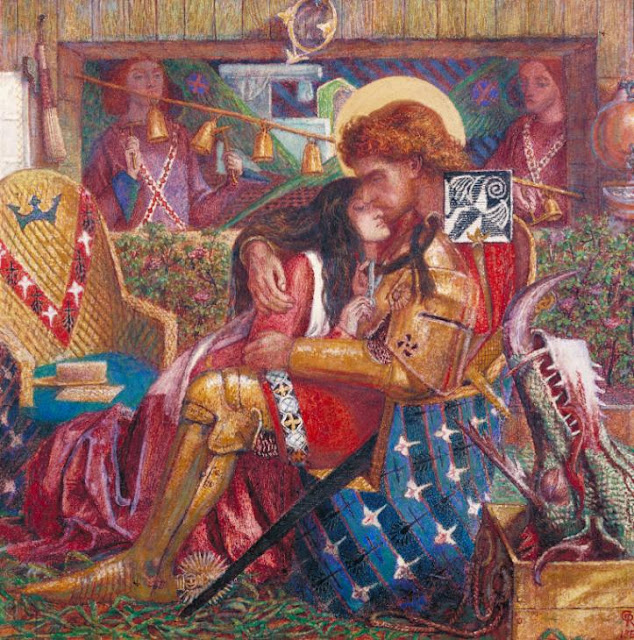 This work was executed while Rossetti and other artists were decorating the Oxford Union with medievalist murals. In Oxford, Rossetti saw Jane Burden, later Mrs William Morris, and immediately asked her to pose for him. She is the model for Princess Sabra, threading a lock of her hair through St George's helmet.

The claustrophobic composition is characteristic of much of Rossetti's work at this time. Sabra's embrace of an armoured figure, enmeshing him with her hair, and St George's distracted gaze hint at Rossetti's dilemma of being involved with Elizabeth Siddall but feeling a strong attraction for Jane. More St George and Princess Sabra

Dante Gabriel Rossetti (12 May 1828 – 9 April 1882) was an English poet, illustrator, painter and translator. He founded the Pre-Raphaelite Brotherhood in 1848 with William Holman Hunt and John Everett Millais. Rossetti was later to be the main inspiration for a second generation of artists and writers influenced by the movement. His work also influenced the European Symbolists and was a major precursor of the Aesthetic movement.

Rossetti's personal life was closely linked to his work, especially his relationships with his models and muses Elizabeth Siddal, Fanny Cornforth and Jane Morris. More 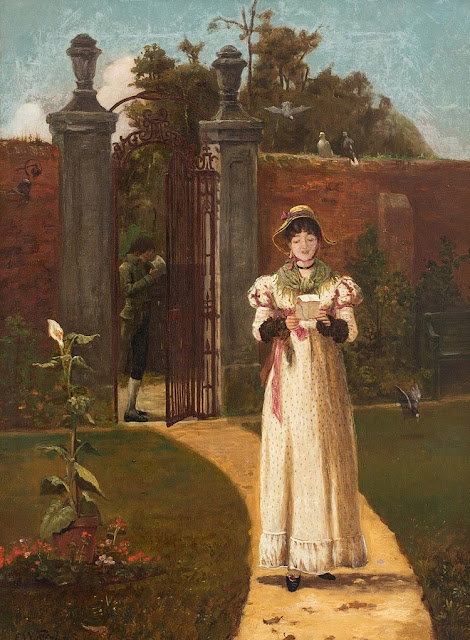 
Sir Ernest Albert Waterlow RA (24 May 1850 – 25 October 1919) was an English painter. He was born in London, and received the main part of his art education in the Royal Academy schools, where, in 1873, he gained the Turner medal for landscape-painting.

He began to exhibit in 1872 and produced a considerable number of admirable landscapes, in oil and watercolour, handled with grace and distinction. One of his pictures, Galway Gossips, is in the Tate collection (below). More on Sir Ernest Albert Waterlow 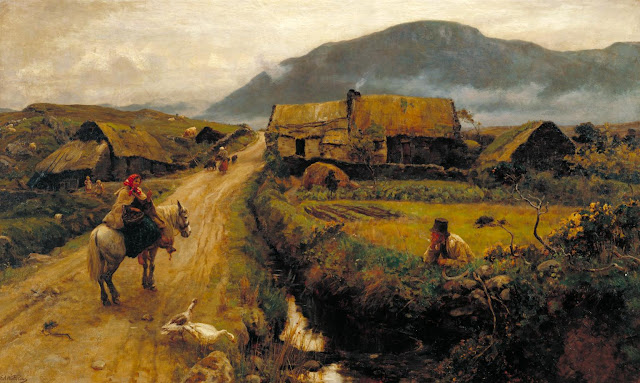 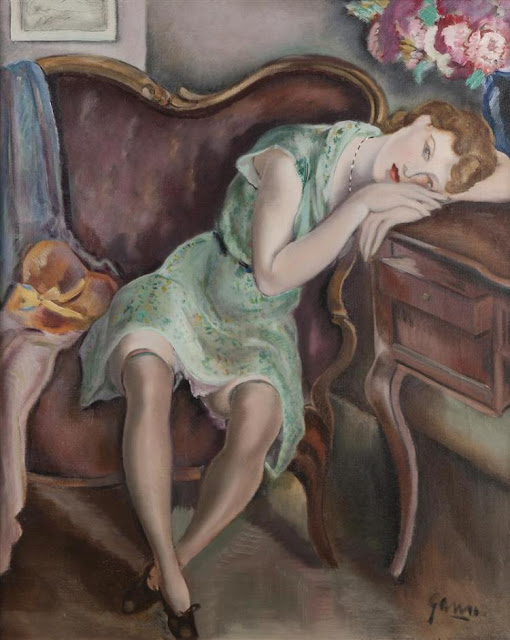 
Emil Ganso, (1895-1941 German/American)  was born in Halberstadt, Germany in and came to the United States as a teenager. By 1914 Ganso was taking evening classes at the National Academy's School of Fine Arts while supporting himself as a baker. His work was soon identified by Erhard Weyhe who went on to show Ganso's work at the Weyhe Gallery. Ganso first exhibited at the Society of Independent Artists in 1921, as well as at the Salons of America from 1922 to 1925. By 1925 Weyhe Gallery began to represent Ganso which gave him the funds to spend his first summer in the art colony of Woodstock, New York in 1926. Weyhe Gallery continued to exhibit Ganso's work through the 1940s.

In 1929 Ganso visited Paris. Perhaps it was this Paris trip that sparked Ganso's interest in photography. Ganso received a Guggenheim Fellowship in 1933 which he used to study and paint in Europe. In the 1930s Ganso also kept a studio at 54 West 74th Street.

In 1930 Emil Ganso began to be invited to exhibit at the Corcoran Gallery of Art, Washington, DC (1930-1935); the Art Institute of Chicago; the Wichita Art Museum, Kansas; the Pennsylvania Academy of the Fine Arts (1931-1938); and the Whitney Museum of American Art (1927-1941). Emil Ganso also exhibited at both the 1939 New York World's Fair and the Golden Gate Exposition in San Francisco that same year. Ganso was awarded the Pennell Memorial Medal from the Pennsylvania Academy of the Fine Arts in 1938. As a result of the success of his art, Ganso was offered an artist-in-residence position in 1940 at the University of Iowa. It was there that he died in 1941. More on Emil Ganso 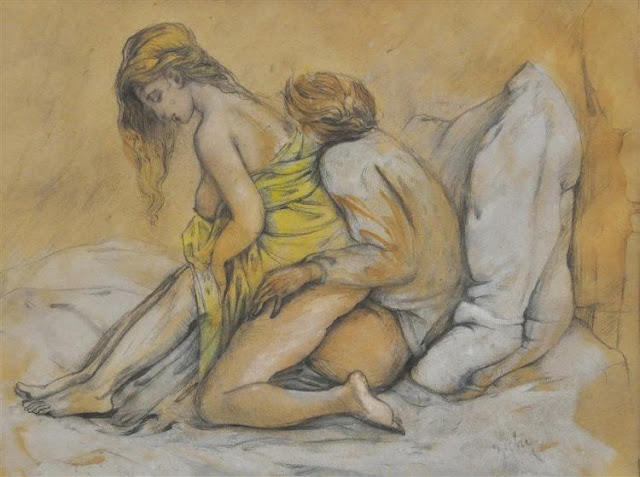 Zichy was a significant representative of Hungarian romantic painting. During his law studies in Pest from 1842, he attended Jakab Marastoni's school as well. In Vienna he was Waldmüller's pupil in 1844. "Lifeboat", his first major work, comes from this time. On Waldmüller's recommendation, he became an art teacher in St. Petersburg. He swore allegiance to freedom by painting the portrait of Lajos Batthyány, the first Hungarian prime minister, in 1849. From 1850 onwards, he worked as a retoucher, but he also did pencil drawings, water colours and portraits in oil. His erotic drawings have a particular warm intensity in which both members of the couple seem equal partners. He settled down in Paris in 1874.

In 1881 he was in Tbilisi, Georgia, where he started working on illustrations for "The Knight in the Panther's Skin" at the request of the Georgian intelligencia. He painted 35 pictures in total. The publishing commission of the work of "The Knight in the Panther's Skin" chose 27 pictures to be included in the publication. The painter refused to take payment for the works, so impressed was he by the poem itself. Instead, he gifted the works to the Georgian people. More on Mihály Zichy 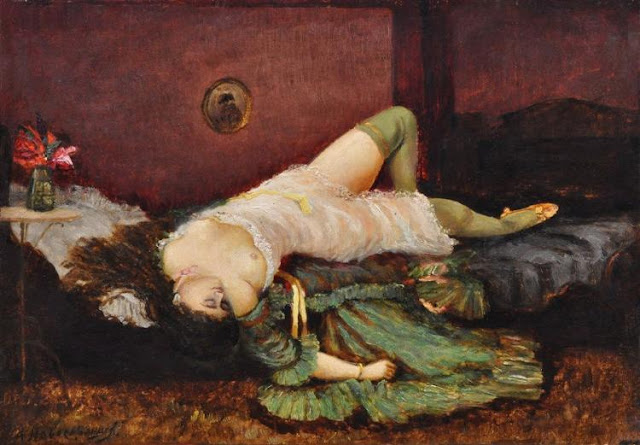 
Novoskoltsev, Alexander Nikanorovich, (1853 - 1919 Russia) studied at the Moscow School of Painting, Sculpture and Architecture under Vladimir Perov and won numerous gold and silver medals for his masterfully rich historical and genre paintings. He went on to study throughout Europe and later taught at the Imperial Academy of Arts in St. Petersburg.  Several of his most important masterpieces hang in the State Russian Museum, St. Petersburg. Novoskoltsev is known to have painted a composition on a similar theme in 1886, which is listed in Fedor Bulgakov's 1890 biographical dictionary of contemporary artists Nashi khudozhniki on page 74. More on Novoskoltsev, Alexander Nikanorovich 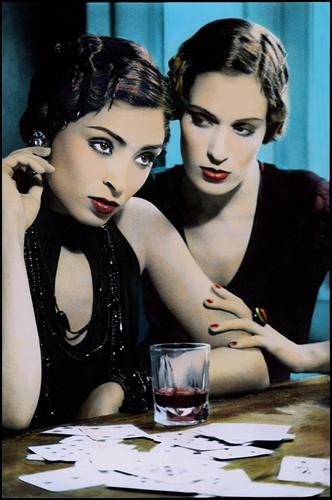