Paris, France's capital, is a major European city and a global center for art, fashion, gastronomy and culture. Its 19th-century cityscape is crisscrossed by wide boulevards and the River Seine. Beyond such landmarks as the Eiffel Tower and the 12th-century, Gothic Notre-Dame cathedral, the city is known for its cafe culture and designer boutiques along the Rue du Faubourg Saint-Honoré. More on Paris 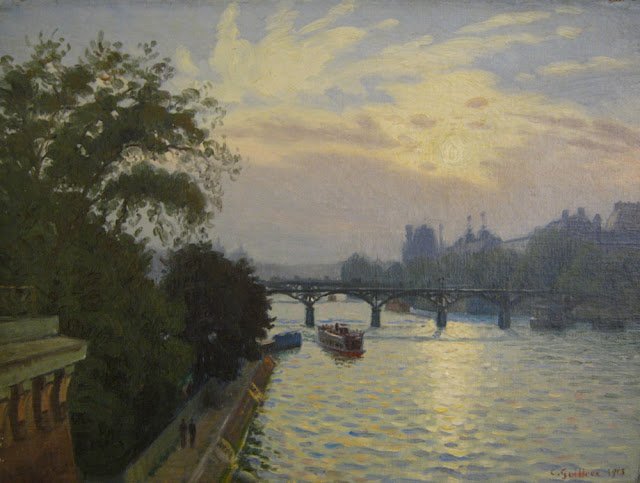 The Pont des Arts or Passerelle des Arts is a pedestrian bridge in Paris which crosses the River Seine. It links the Institut de France and the central square of the Palais du Louvre, (which had been termed the "Palais des Arts" under the First French Empire). More on The Pont des Arts

An employee of the Bibliothèque Nationale in Paris, Guilloux was a self-taught artist who critics liken to the time of the Symbolist movement. From 1891, his works were successfully received at the exhibitions of the Société des artistes indépendants, and then at the "Impressionists and Symbolists" exhibitions at the gallery of Le Barc de Boutteville.

This structuring of space and the distribution of forms and colors are found in many works painted by Guilloux: He exhibited at the Salon de la Société nationale des Beaux-Arts in 1905, and at the Salon des Indépendants between 1911 and 1914.[1] In 2007, the Musée d'Orsay bought his painting Crépuscule' More on Charles-Victor Guilloux 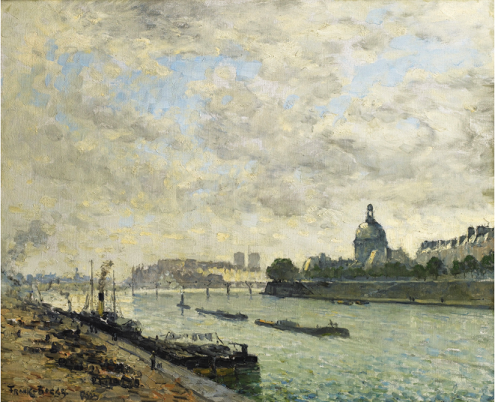 Mixing tonalist and impressionist elements, Frank Myers Boggs forged a novel artistic style at the juncture of fin-de-siècle American and European traditions. Born in Ohio, Boggs trained at the École des Beaux-Arts under Jean Léon Gerôme and spent the majority of his life in Paris. There, he accomplished the rare feat of gaining prominence in both the French and American art worlds. By the end of his life, Boggs had essentially transformed himself into a French impressionist: he became a French citizen in 1923 and earned the French Legion of Honor three years later. 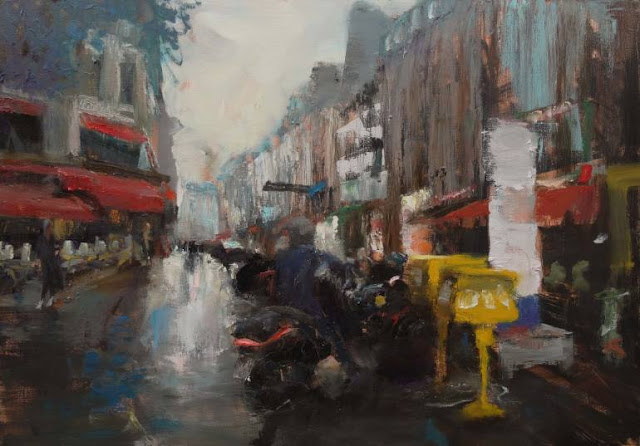 In the past the La Roquette district, next to the Marais and Place de la Bastille, was known for containing two prisons: the "petite Roquette" for young delinquents and women, and the "Grande Roquette" for major criminals. The guillotine was brought out at night to bring the lives of the imprisoned to a fateful end…

Leonardi Manuel, is a self-taught painter working in mainly in Paris. He mainly paints urban landscapes and people. Oil is his prefered medium, but also works with ink. More on Leonardi Manuel

Mo is a Singaporean artist based in Paris, but he wanders the world's cities interpreting modern urban landscapes in his dispassionate, architectural style. His works are based on his impressions of cities ranging from Paris to Hong Kong, Barcelona to Tokyo. After he graduated with a diploma in graphic design, he took a trip to Europe to visit art museums and ended up staying for several years, painting and selling his works on the streets of Paris, Florence and London. More on Mo 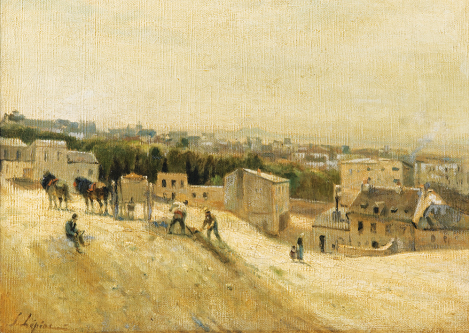 Stanislas Victor Edouard Lépine (October 3, 1835 – September 28, 1892) was a French painter who specialized in landscapes, especially views of the Seine. Lépine was born in Caen. An important influence in his artistic formation was Corot, whom he met in Normandy in 1859, becoming his student the following year.

Lépine's favorite subject was the Seine, which he was to paint in all its aspects for the rest of his life. He participated in the first Impressionist exhibition, held at Nadar's in 1874, although he is generally not considered an Impressionist. His paintings are placid in mood and are usually small in scale. Lépine was awarded the First Prize medal at the Exposition of 1889. He died suddenly in Paris in 1892. More Stanislas Victor Edouard Lépine 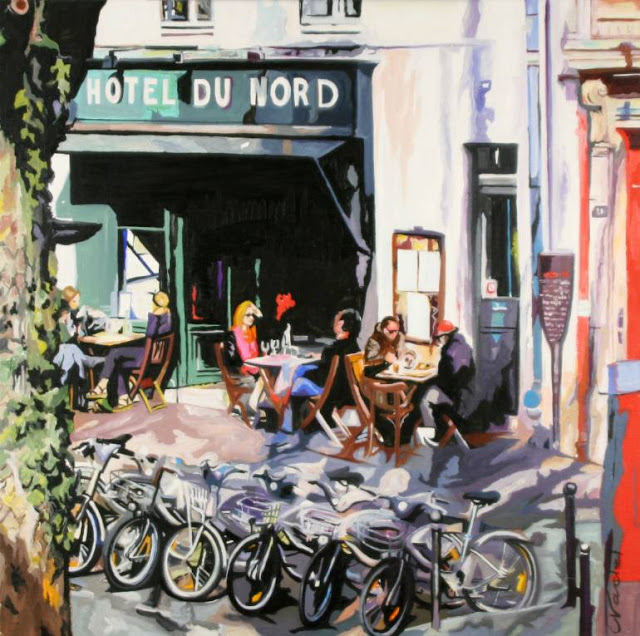 The Hôtel du Nord was built around 1912, and at that time belonged to a Mr and Mrs Dabit. The building still consists of three floors, with eight windows. Written in blue, tiled mosaics on its front façade are the words “Hôtel du Nord”. In 1938, the humble hotel consisted of 40 clean but modest rooms, and a narrow staircase. It was frequented during the week by workers, unemployed people and sailors. The canal could be seen out the windows, and from the attic, which was typically piled high with bric-a-brac. The panorama of Parisian rooftops seen from this window today has not changed since before the war. The Hôtel du Nord also had a picturesque courtyard with a little stable, chickens and a laundry. These days the restaurant has the same zinc floors, black and white tiles, and cozy tables. More on The Hôtel du Nord

Clotilde Nadel. From the graphic art school of the rue d'Ulm in Paris, she created her illustrating studio in the 1980s. After 25 years as an illustrator for advertising and publishing, she retained a precise and realistic touch. But this concrete aspect, almost photographic, both in the making and framing, is at the service of a sensitive reverie and a real poetry. "My imagination works on the places I cross, the images I meet, such as the manga drawings. From this I recompose my own reality. I like to make situations blending the secular tradition of certain cultures, like Japan, and the reality of the contemporary world. I start with images, memories, photographs or lived feelings. More on Clotilde Nadel 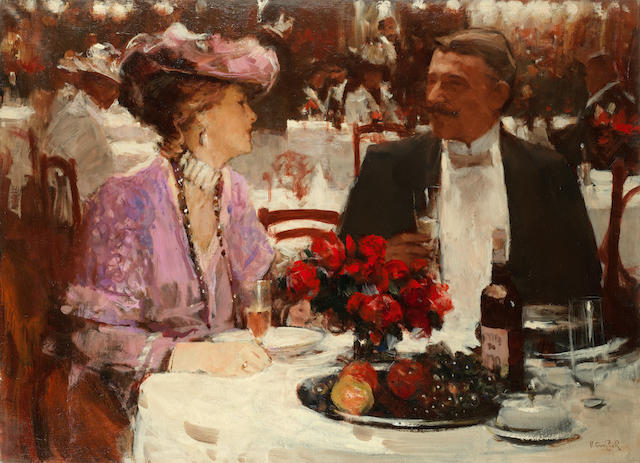 
Victor Guerrier, (French, 1893-1968)  was born and trained in Lyon living much of his life at Saint Cyr au Mont d’Or. He began his career as an illustrator but made his name painting Belle Epoque subjects and Parisian life between the wars.

Clearly inspired by the work of Impressionist masters such Manet and Toulouse-Lautrec his work captures and celebrates the diversity of life in Paris at the turn of the century; from the nightclubs of Montmartre to the cafés of the Champ-Elysses, Guerrier depicts French high society in its pomp. There is often a subtle narrative to the work, where a stolen glance speaks volumes. Further evidence of Manet’s work is evident in his figures, who often stare directly at the viewer, creating images that are, at once, engaging and arresting, while the fashions of the age are beautifully rendered with a vivid palette and deftly applied impasto.

Guerrier also worked in the Alps and Algeria producing a number of Orientalist subjects along with a series of paintings in St Paul de Vence. He exhibited at the Salon de Printemps. More on Victor Guerrier, 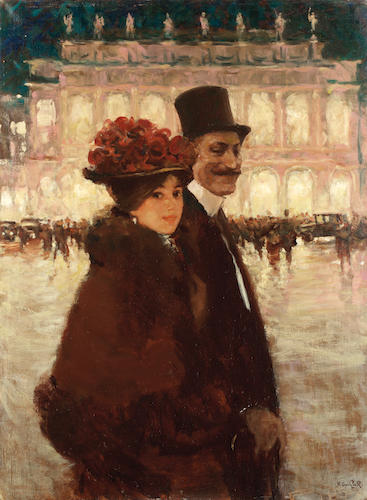 
The Place de l'Opéra is a square in the 9th arrondissement of Paris, at the junction of boulevard des Italiens, boulevard des Capucines, avenue de l'Opéra, rue Auber, rue Halévy, rue de la Paix and rue du Quatre-Septembre. It was built at the same time as the Opéra Garnier (designed by Charles Garnier), which is sited on it and after which it is named. Both structures were part of the Haussmannian redesign of Paris under Napoleon III of France. More on The Place de l'Opéra 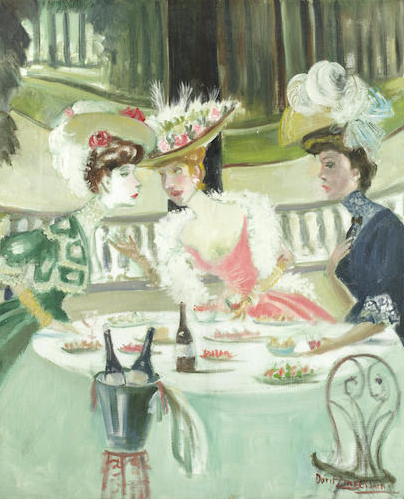 Doris Clare Zinkeisen (31 July 1898 – 3 January 1991) was a Scottish theatrical stage and costume designer, painter, commercial artist and writer. She was best known for her work in theatrical design.

Zinkeisen attended the Harrow School of Art for four years and won a scholarship to the Royal Academy Schools in 1917 together with her sister Anna. They then shared a studio in London during the 1920s and '30s from where she embarked on her career.

Zinkeisen's realist style made her popular as a portraitist and she became a well-known society painter. The subject matter of her paintings, society portraiture, equestrian portraiture and scenes from the parks of London and Paris reflect the lifestyle of the upper class at the time. She also worked widely in other media as an illustrator and commercial artist.

During World War II, Zinkeisen joined the St John Ambulance Brigade. She worked in the casualty department in St Mary’s Hospital, Paddington the mornings and painted in the afternoons, recording the events of the day. Following the liberation of Europe in 1945, Zinkeisen was commissioned by the War Artists' Advisory Committee as a war artist for the North West Europe. 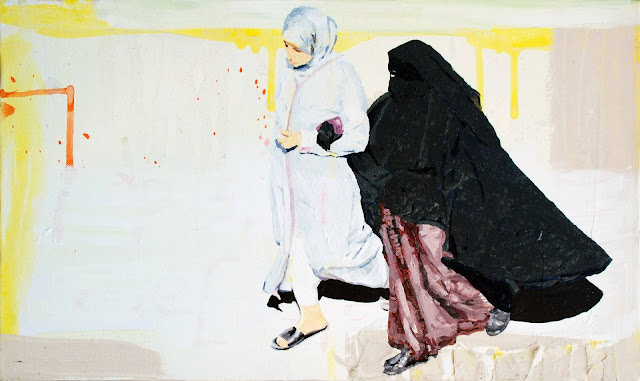 Arne Reynaert, Belgium
Je m’appelle Jane et je t’emmerde/ My name is Jane and you are buggered by me
Acrylic on Canvas and Wood
Size: 11.8 H x 19.7 W x 2 in
Private Collection

The abstract background is present and plays an important role in the composition. It might, at the same time, stimulate the spectator towards a story, or at least towards questioning why the forms are there. The abstract forms eliminate all reference to the geographical situation of the scene. It might be at the Djemaa el Fna square, in a Brussels suburb or downtown Paris. And maybe in a few hundred years, there won't be much difference anymore (between these places). More on this painting

Arne Reynaert examines personal and sensitive positions people adopt naturally towards each other, in relation to their environment and themselves. The figures seem somehow or other to be lost in the present, in the indefinable moment between a (the) past and a (the) future. His work represents captivity in the present which, scientifically, does not even exist. Because the artist detests gimmicks, none of the above is a rule: in some of the recent works, the depicted people as a landscape, or the manipulated canvas becomes the landscape, or the people are simply missing (or missed by the spectator). On top, or underneath, the artist questions, philosophically, seemingly ordinary concepts which are part of our daily consciousness, a consciousness that is limited by the resolution of our senses, the capacity of our brain, the limited understanding of our environment and our instinct driven behaviour.

One often finds Reynaert reflections in scribblings directly in the painting, in writings hitched on or near by the paintings, and in titles. In his questions, thoughts and ideas he takes a distance that is so immense they become universal and often affect deeply. Besides his philosophical approach, Arne Reynaert longs for a purge in his painting(s). He is obsessed by the poetical essence of the image. More on Arne Reynaert 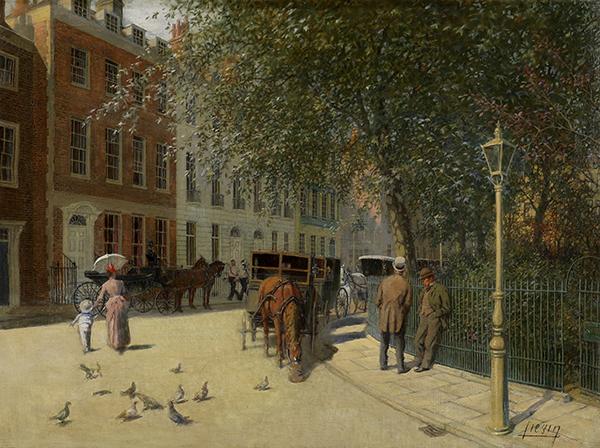 Eugène Galien-Laloue (1854–1941) was a French artist of French-Italian parents and was born in Paris on December 11, 1854. He was a populariser of street scenes, usually painted in autumn or winter. His paintings of the early 1900s accurately represent the era in which he lived: a happy, bustling Paris, la Belle Époque, with horse-drawn carriages, trolley cars and its first omnibuses. Galien-Laloue's works are valued not only for their contribution to 20th-century art, but for the actual history, which they document. His work can be seen at the Musée des Beaux-Arts, Louvier; Musée des Beaux-Arts, La Rochelle; Mulhouse, France.

A typical Galien-Laloue painting depicts sidewalks and avenues crowded with people or tourists mingling before the capital's monuments. He also painted the landscapes of Normandy and Seine-et-Marne, as well as military scenes he was commissioned to produce in 1914. The Republic of France selected Galien-Laloue to work as a 'war artist,' both during the Franco-Prussian War and World War I, chiefly in watercolor. More on Eugène Galien-Laloue


If you enjoyed this post, please share with friends and family.
Posted by Henry Zaidan at 11:18 AM