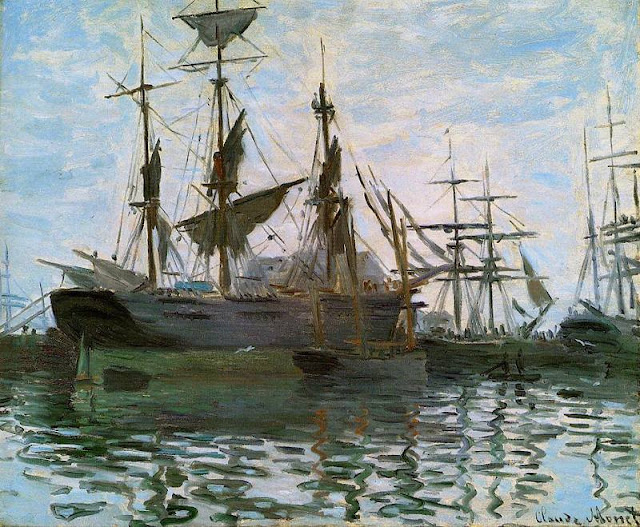 Oscar-Claude Monet (14 November 1840 – 5 December 1926) was a founder of French Impressionist painting, and the most consistent and prolific practitioner of the movement's philosophy of expressing one's perceptions before nature, especially as applied to plein-air landscape painting. The term "Impressionism" is derived from the title of his painting Impression, soleil levant (Impression, Sunrise), which was exhibited in 1874 in the first of the independent exhibitions mounted by Monet and his associates as an alternative to the Salon de Paris.

Monet's ambition of documenting the French countryside led him to adopt a method of painting the same scene many times in order to capture the changing of light and the passing of the seasons. From 1883 Monet lived in Giverny, where he purchased a house and property and began a vast landscaping project which included lily ponds that would become the subjects of his best-known works. In 1899 he began painting the water lilies, first in vertical views with a Japanese bridge as a central feature, and later in the series of large-scale paintings that was to occupy him continuously for the next 20 years of his life. More Oscar-Claude Monet 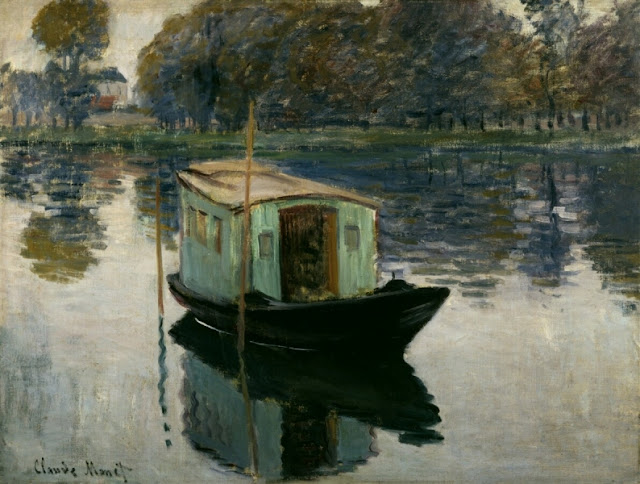 From 1871 to 1878, Claude Monet lived in Argenteuil, a village on the Seine just outside Paris. Following the example of the painter Charles-François Daubigny, he had a boat built in which he could paint the surroundings from on the water. Thus he was able to depict the effects of light on the water and on the landscape from any convenient spot.

In this painting the boat is moored between two poles, motionless on the water. A figure is vaguely distinguishable in the cabin, probably Monet himself. The majority of the canvas is occupied by the clam flowing river, in which the boat studio and the trees, but also the sky are reflected. In this painting, Claude Monet gives an impression of the tranquillity on the water during a summer day. More on Monet 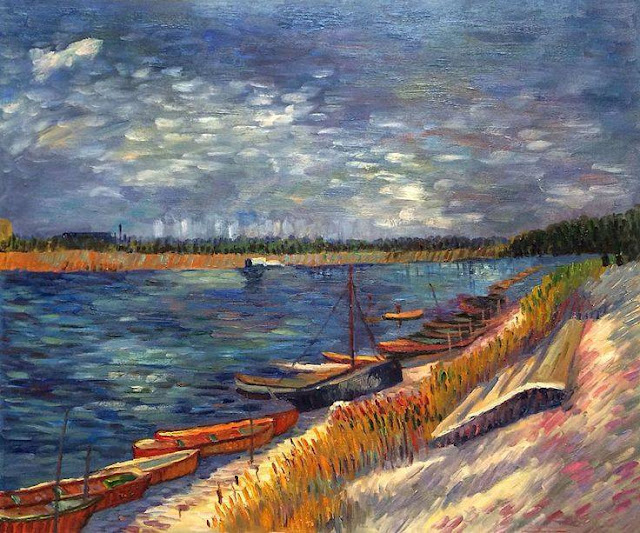 Vincent van Gogh (born March 30, 1853, Zundert, Neth.—died July 29, 1890, Auvers-sur-Oise, near Paris, France). Dutch painter, generally considered the greatest after Rembrandt, and one of the greatest of the Post-Impressionists. The striking colour, emphatic brushwork, and contoured forms of his work powerfully influenced the current of Expressionism in modern art. Van Gogh’s art became astoundingly popular after his death, especially in the late 20th century, when his work sold for record-breaking sums at auctions around the world and was featured in blockbuster touring exhibitions. In part because of his extensive published letters, van Gogh has also been mythologized in the popular imagination as the quintessential tortured artist. More on Vincent van Gogh 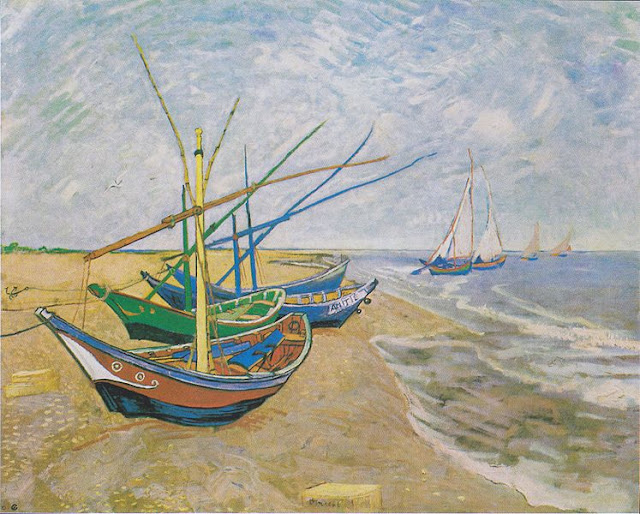 Saintes-Maries is the subject of a series of paintings that Vincent van Gogh made in 1888. When Van Gogh lived in Arles, he took a trip to Saintes-Maries-de-la-Mer on the Mediterranean sea, where he made several paintings of the seascape and town.

Van Gogh's week-long trip was taken to recover from his health problems and make some seaside paintings and drawings. At that time Saintes-Maries was a small fishing village with under a hundred homes. More on Van Gogh's trip 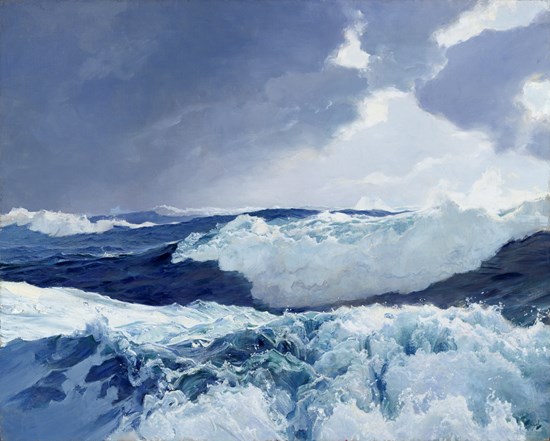 Frederick Judd Waugh (September 13, 1861 in Bordentown, New Jersey – September 10, 1940) was an American artist, primarily known as a marine artist. During World War I, he designed ship camouflage for the U.S. Navy, under the direction of Everett L. Warner.

Waugh was the son of a well-known Philadelphia portrait painter, Samuel Waugh. He studied at the Pennsylvania Academy of Fine Arts with Thomas Eakins, and at the Académie Julian in Paris, with Adolphe-William Bouguereau. After leaving Paris, he moved to England, residing on the island of Sark in the English Channel, where he made his living as a seascape painter.

In 1908, Waugh returned to the U.S. and settled in Montclair Heights, New Jersey. He had no studio, until art collector William T. Evans offered him one in exchange for one painting a year. In later years, he lived on Bailey Island, Maine, and in Provincetown, Massachusetts.

In 1918, Waugh was recommended to serve as a camouflage artist (or camoufleur) for the U.S. Navy, as a member of the Design Section of its marine camouflage unit (Behrens 2002, 2009). That section was located in Washington, D.C., and was headed by American painter Everett L. Warner (Warner 1919). More on Frederick Judd Waugh 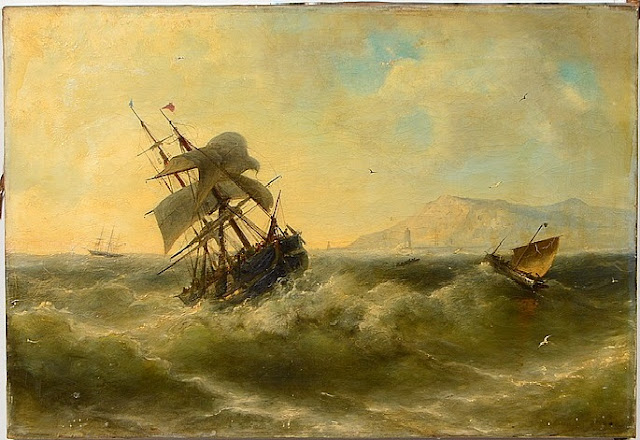 Nicolaas Riegen was born in Amsterdam, May 31, 1827, where he continued to live and work for the rest of his life. Riegen was a skilled painter of seascapes and river views, of various weather conditions. He was known to have painted city views and landscapes according to the Hague School as well. Riegen exhibited his work during his life at events in Arnhem and Maastricht. Although he was a registered painter, and thus a professional, his work is seldom seen. In 1872 he applied to "Arti et Amicitiae" in Amsterdam. In 1899 Riegen passed away. More on Nicolaas Riegen 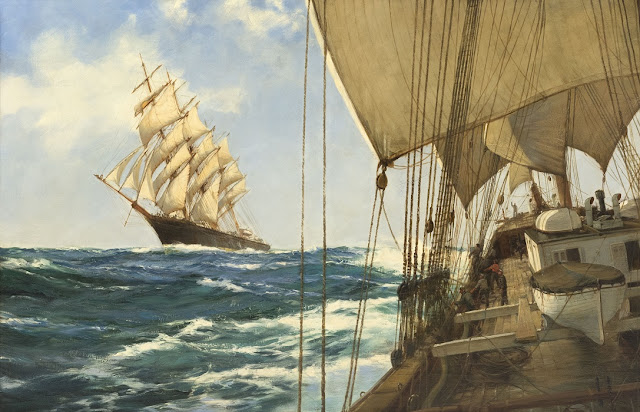 Montague Dawson RMSA, FRSA (1890–1973) was a British painter who was renowned as a maritime artist. His most famous paintings depict sailing ships, usually clippers or warships of the 18th and 19th centuries. Montague was the son of a keen yachtsman and the grandson of the marine painter Henry Dawson (1811–1878), born in Chiswick, London. Much of his childhood was spent on Southampton Water where he was able to indulge his interest in the study of ships. For a brief period around 1910 Dawson worked for a commercial art studio in Bedford Row, London, but with the outbreak of the First World War he joined the Royal Navy. Whilst serving with the Navy in Falmouth he met Charles Napier Hemy (1841–1917), who considerably influenced his work. In 1924 Dawson was the official artist for an Expedition to the South Seas by the steam yacht St.George. During the expedition he provided illustrated reports to the Graphic magazine. 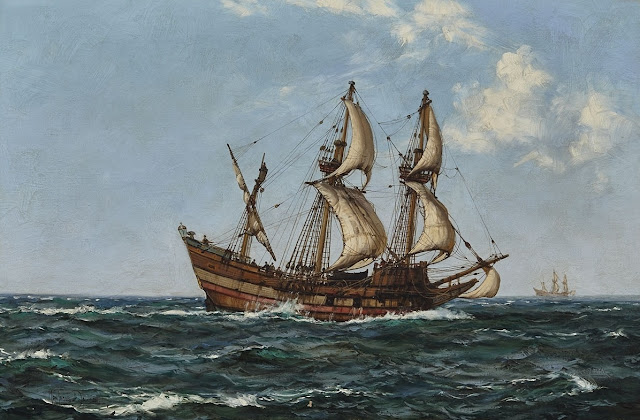 Halve Maen (Dutch pronunciation) was a Dutch East India Company vlieboot which sailed into what is now New York Harbor in September 1609. She was commissioned by the VOC Chamber of Amsterdam in the Dutch Republic to covertly find a western passage to China. The ship was captained by Henry Hudson, an Englishman in the service of the Dutch Republic. More on Halve Maen

After the War, Dawson established himself as a professional marine artist, concentrating on historical subjects and portraits of deep-water sailing ships. During the Second World War, he was employed as a war artist. Dawson exhibited regularly at the Royal Society of Marine Artists, of which he became a member, from 1946 to 1964, and occasionally at the Royal Academy between 1917 and 1936. By the 1930s he was considered one of the greatest living marine artists, whose patrons included two American Presidents, Dwight D Eisenhower and Lyndon B Johnson, as well as the British Royal Family. Also in the 1930s, he moved to Milford-Upon-Sea in Hampshire, living there for many years. Dawson is noted for the strict accuracy in the nautical detail of his paintings which often sell for six figures.

The work of Montague Dawson is represented in the National Maritime Museum, Greenwich and the Royal Naval Museum, Portsmouth. More on Montague Dawson

Thomas Bush Hardy (1842, Sheffield – 1897, Maida Vale, London) was a British marine painter and watercolourist. As a young man he travelled in the Netherlands and Italy. In 1884 Hardy was elected a Member of the Royal Society of British Artists. He exhibited with the Society and also at the Royal Academy.
His paintings feature coastal scenes in England and the Netherlands, the French Channel ports and the Venetian Lagoon.
Hardy had nine children. His son Dudley Hardy was a painter, illustrator and poster designer. His daughter Dorothy received an MBE after working as a nurse in the First World War. He died on 15 December 1897 in Maida Vale, London. More on Thomas Bush Hardy 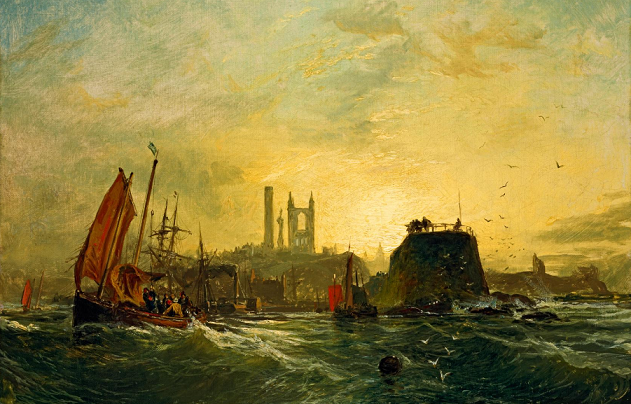 
This dramatically lit scene shows a view just off the harbour of St Andrews, looking back towards the town. The remains of the ruined Cathedral can be seen perched on the hill. They form a backdrop to the foreground drama of the fishing boat venturing out into the turbulent waters of St Andrews Bay, notorious for its heavy swell and frequent shipwrecks. Benefitting from improvements in rail connections across Scotland, Bough made frequent excursions to the coastal towns and villages of the East Neuk of Fife from the 1850s to the 1870s. This painting was completed in 1856, the same year that Bough was elected an Associate of the Royal Scottish Academy. More on this painting


Samuel Bough RSA (1822–1878) was an English-born landscape painter who spent much of his career working in Scotland. He was raised in relative poverty, but with a keen encouragement in the arts.

He was self-taught but mixed with local artists such as Richard Harrington and George Sheffield, and was strongly influenced by the work of Turner. After an unsuccessful attempt to live as an artist in Carlisle he obtained a job and as a theatre scenery painter in Manchester in 1845, and later in Glasgow. Encouraged by Daniel Macnee to take up landscape painting he moved to Hamilton from 1851-4 and worked there. In 1854 he moved to Port Glasgow to work on his technique of painting ships and harbours. He also began supplementing his income by illustrating books, before moving to Edinburgh in 1855.

His health began to fail in 1877 and in January 1878 he suffered a stroke. He died of prostate cancer. More on Samuel Bough RSA 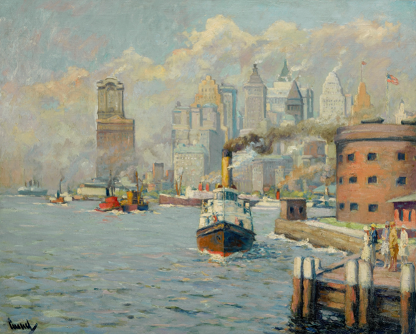 In the present picture Cucuel illustrates southern Manhattan from a vantage point on Governor’s Island. At right is Castle Williams, a circular fortification on the northwest point of the island and part of a system of forts constructed in the early 19th century to protect New York City from naval attack. Other structures visible in the skyline include the Woolworth Building, the International Mercantile Marine Company and the Whitehall Building. More on this painting

Edward Cucuel (August 6, 1875, San Francisco – April 18, 1954, Pasadena, California), was an American-born painter who lived and worked in Germany. At the age of fourteen he was already attending the San Francisco Art Institute and doing illustrations for The Examiner. At the age of seventeen, he went to Paris where he attended the Académie Julian and the Académie Colarossi, finishing at the Académie des Beaux-Arts under Jean-Léon Gérôme. When he came back to the United States in 1896, he briefly worked as a newspaper illustrator in New York, but returned to France and Italy to acquaint himself with the old masters at first hand. He ended up in Germany in 1899, where he worked as a free-lance newspaper illustrator in Berlin and Leipzig.

Following a brief stay in San Francisco to visit his family after the earthquake, he settled in Munich in 1907. It was there that he was introduced to plein-air painting. He also became a member of the Munich Secession. In 1913, he became a member of the Société Nationale des Beaux-Arts and exhibited with the Salon d'Automne. During the First World War, he lived in Holzhausen on the Ammersee, later establishing studios in Munich and Starnberg, his father's hometown. From 1928 to 1939, he commuted between there and New York, where he spent the winters. The beginning of World War Two forced him to leave Germany for good in 1939. He settled in Pasadena, California, where he lived until his death in 1954. More on Edward Cucuel 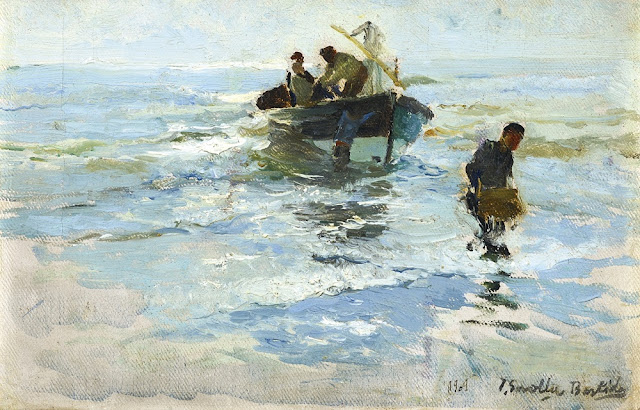 Joaquín Sorolla y Bastida (27 February 1863 – 10 August 1923) was a Spanish painter. Sorolla excelled in the painting of portraits, landscapes, and monumental works of social and historical themes. His most typical works are characterized by a dexterous representation of the people and landscape under the sunlight of his native land. More on Joaquín Sorolla y Bastida 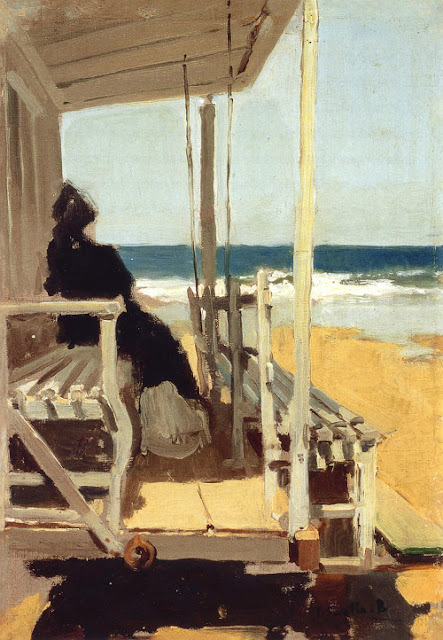