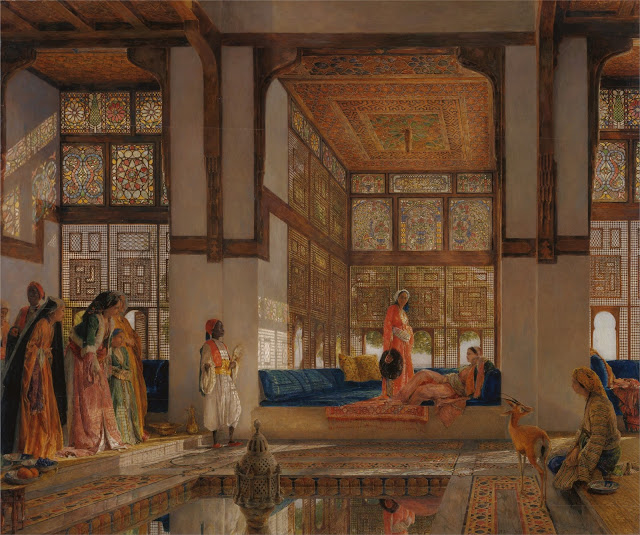 The Reception, 1873, version in oils, using drawings of Lewis' house in Cairo, which he had left over 20 years before. More

John Frederick Lewis RA (London 14 July 1804 – 15 August 1876) was an English Orientalist painter. He specialized in Oriental and Mediterranean scenes in detailed watercolour or oils, very often repeating the same composition in a version in each medium. He lived for several years in a traditional mansion in Cairo, and after his return to England in 1851 he specialized in highly detailed works showing both realistic genre scenes of Middle Eastern life and more idealized scenes in upper class Egyptian interiors with little apparent Western influence.
His very careful and loving representation of Islamic architecture, furnishings, screens, and costumes set new standards of realism, which influenced other artists, including the leading French Orientalist painter Jean-Léon Gérôme in his later works. Unlike many other Orientalist painters who took a salacious interest in the women of the Middle East, he "never painted a nude", and his wife modelled for several of his harem scenes. These, with the rare examples by the classicist painter Lord Leighton, imagine "the harem as a place of almost English domesticity, ... [where]... women's fully clothed respectability suggests a moral healthiness to go with their natural good looks" 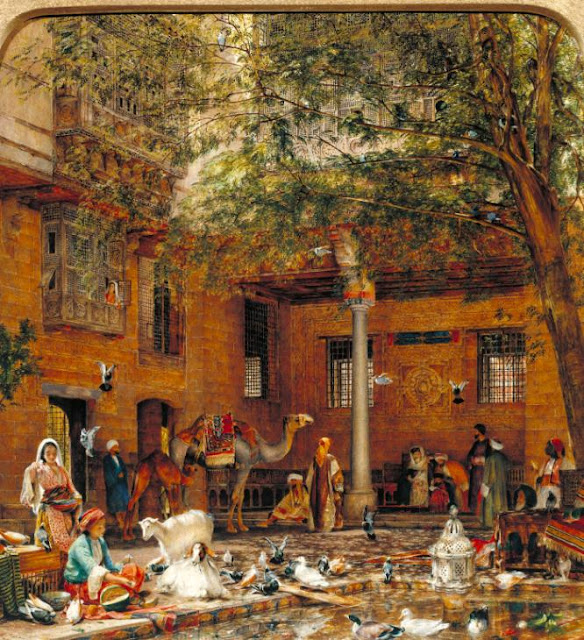 The Coptic Church is the ancient Orthodox Christian Church of Egypt. This study of the patriarch’s house was executed after Lewis’s return from Egypt in 1851, from the sketches he brought back. The picture highlights Lewis’s skill in depicting figures and setting with careful attention to light and shade, produced here by the top-lit courtyard. Lewis caused a sensation when he exhibited one of his Near Eastern scenes in London in 1850. John Ruskin admired his attention to detail, claiming that in truth-to-nature he ranked alongside the Pre-Raphaelite Brotherhood. More 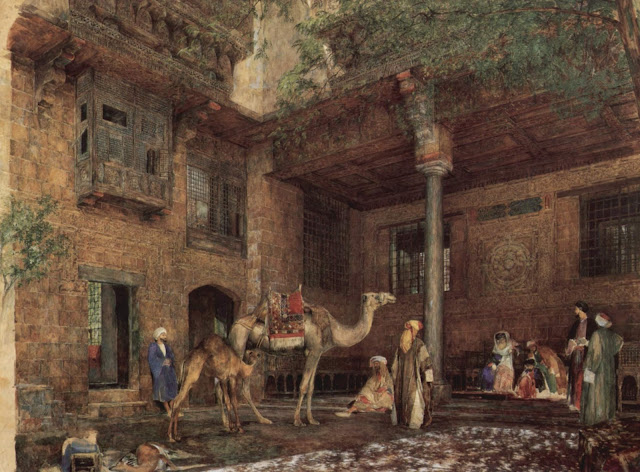 He was the son of Frederick Christian Lewis (1779–1856), an engraver and landscape painter, whose German father had moved to England and changed his name from Ludwig. The leading bookbinder Charles Lewis was John Frederick's uncle, and his younger brothers, another Frederick Christian and Charles George Lewis, were also artists, the latter mainly in reproductive engraving, especially after Edwin Landseer (1802-1873), a childhood neighbour and friend of John Frederick. 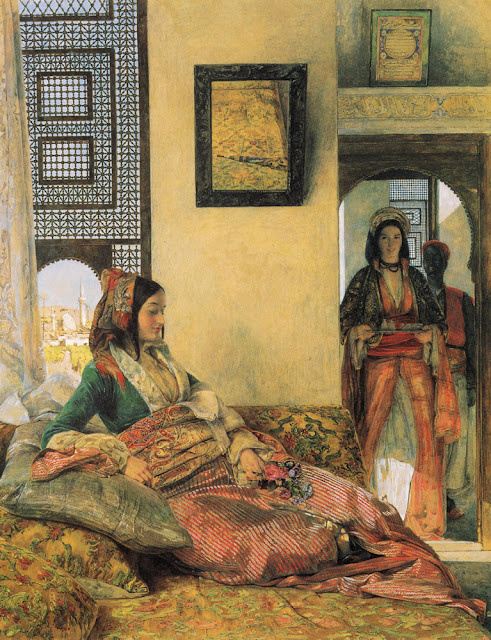 The young woman in the background was reworked as a standalone subject in The Coffee Bearer, two years later (Below).

Lewis and Landseer trained together in the workshop of Sir Thomas Lawrence. Initially Lewis, like Landseer, was an animal painter, and he often included animals throughout his later works, in particular a pet gazelle he had in Cairo. He published prints of the big cats in 1826 and twelve domesticated animals in 1826, and painted two large scenes with animals in Windsor Great Park. 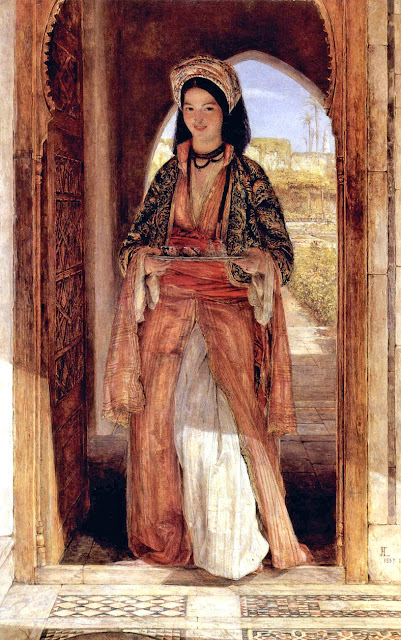 Full figure depiction of a female servant who is walking through the shadows of an arched entranceway. She is dressed in an exotic style, and the scenery behind her is Egyptian-looking, but her skin is pale and her features Western. She carries a tray on which is set two small cups and two small inverted glasses. Her dark hair is partly covered with a turban headdress which hangs darkly behind her head, framing her pale neck. More Coffee Bearer

Lewis toured Europe in 1827, the year he began to paint in watercolour, then travelled in Spain and Morocco between 1832 and 1834. The drawings he made were turned into lithographs by him and other artists, and published as Sketches and Drawings of the Alhambra, made during a Residence in Granada in the Years 1833–4 (1835) and Lewis's Sketches of Spain and Spanish Character (1836). For a while he became known as "Spanish Lewis", to distinguish him from "Indian Lewis", his brother Frederick Christian, who went India in 1834 before dying young. 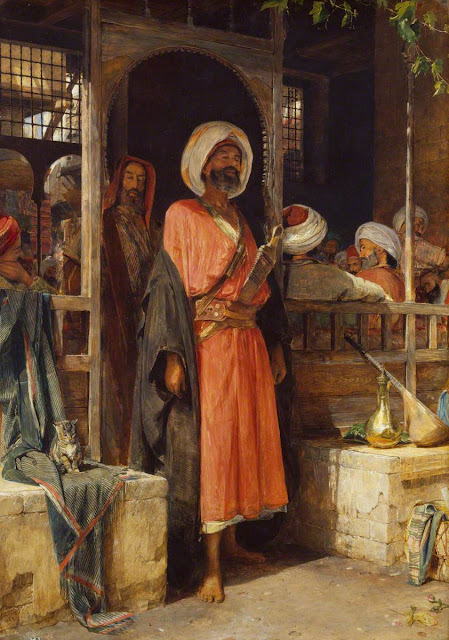 Lewis was an early traveller on what was to become a well-trodden route for English artists, though some ten years behind David Wilkie in Spain. David Roberts, who became the other leading British Orientalist, mainly through his lithographs, was in Spain and the Middle East at the same time as Lewis, though the two rarely met, and William James Müller had been in Cairo in 1838. But no other English artist of the period had such a sustained period in what was then the Ottoman Empire as Lewis did on his last period abroad. 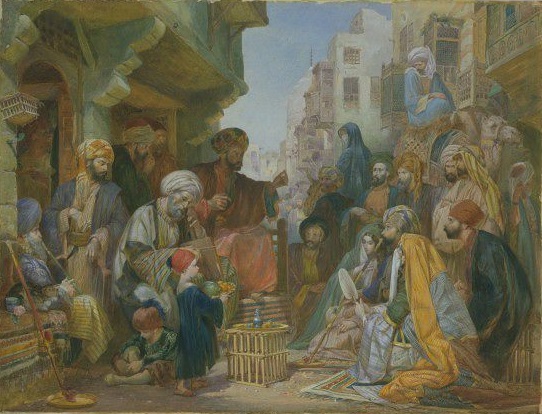 This mysterious watercolour was long mistakenly believed to be by John Frederick Lewis, as it shares many of the characteristics of his work. It is probable that Charles Cattermole for a time consciously imitated Lewis’s technique, style and subject matter. There are two extremely similar Orientalist watercolours by Cattermole in private collections, yet he seems to have returned to more conventional subjects and techniques after 1862.

However, it remains uncertain how Cattermole acquired his understanding of Egyptian life shown in this watercolour. A storyteller or poetry-reciter is performing, with musical accompaniment from a rabab (a kind of viol), to a crowd of passers-by. He holds up his forefinger and thumb either in a gesture to reinforce a point in his story or to display a small object a coin or jewel- to his audience. They listen with rapt attention, men and women, young and old, fair and dark, rich and poor, representative of the medley of different types of people found in Cairo's busy streets. Among them are a wealthy merchant with his two wives and servant, whose garments create an opportunity for the artist to display his knowledge of local costume and his skill in rendering the texture and sheen of rich materials. The street is the Sharia Bab al-Wazir, identifiable from the dome of the Mosque of Amir Khayrbak in the background. More Cattermole

George Cattermole (10 August 1800 – 24 July 1868) was an English painter and illustrator, chiefly in watercolours. He was a friend of Charles Dickens and many other literary and artistic figures.

He was born at Dickleburgh, near Diss, Norfolk. At the age of fourteen he began working as an architectural and topographical draughtsman for the antiquary John Britton. Afterwards he contributed designs to be engraved in the annuals then so popular, then progressed into watercolour painting, becoming an associate of the Royal Watercolour Society in 1822, and a full member in 1833. In 1850 he withdrew from active connection with this society, and took to painting in oil. His most fertile period was between 1833 and 1850. At the Paris Exhibition of 1855 he received one of the five first-class gold medals awarded to British painters. He also enjoyed professional honors in Amsterdam and in Belgium. Among his leading works are The Murder of the Bishop of Liege, The Armourer relating the Story of the Sword, The Assassination of the Regent Murray by Hamilton of Bothwellhaugh, and (in oil) A Terrible Secret.

He was largely employed by publishers, the Waverley Novels. He collaborated on illustrations for Dickens's The Old Curiosity Shop and Barnaby Rudge. Cattermole specialized in rendering scenes of chivalry, of medievalism, and generally of the romantic aspects of the past. More 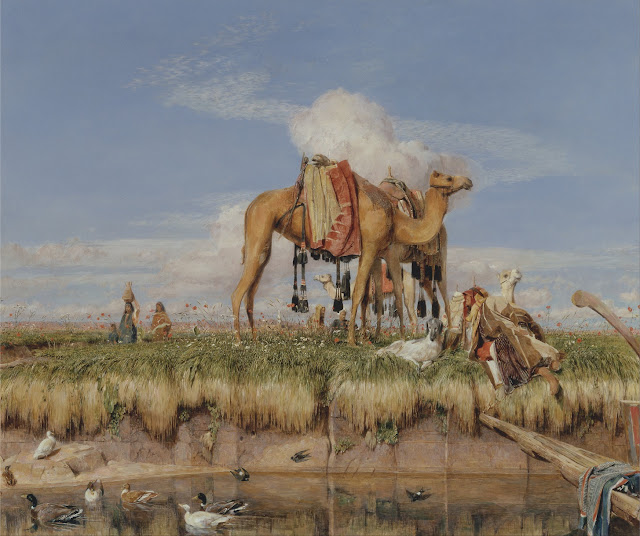 In 1837 he left for travels that took him to Constantinople in 1840, after Italy and Greece. He continued to Egypt and lived in Cairo in rather grand style between 1841 and 1851, in a traditional upper-class house that he often used as a setting for his paintings. He was visited by William Makepeace Thackeray, an old friend, who described him in the comic account of his travels he published as a "languid Lotus-eater" leading a "dreamy, hazy, lazy, tobaccofied life" in a version of local dress that included a "Damascus scimitar" – Lewis was often photographed in such a costume in later life. In 1847 he married Marian Harper in Alexandria. 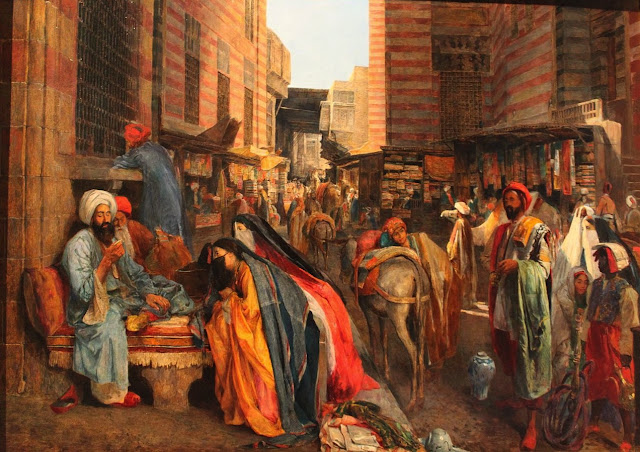 On the right is the staircase and the entrance porch of the madrasa of al Ghouri, which includes a mosque. On the left, the building includes the mausoleum [ 3 ] and a Sabil-Kuttab. These constructions were carried out on order of the Sultan Mamluk el Ghouri in 1504-1505 and are known as the Wekalet Al-Ghouri .

The scene on the left side of the composition depicts two women and a Sarraf (money changer). 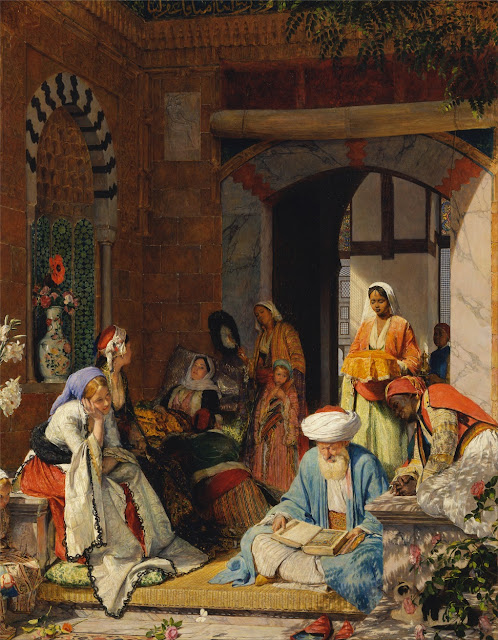 In Egypt he made large numbers of precise drawings that he turned into paintings after his return to England in 1851. He lived in Walton-on-Thames from 1854 until his death. In 1850 his watercolour The Hhareem (now in a private collection in Japan, and rather faded) was a huge hit when exhibited in London, and praised by John Ruskin and other critics. This is in fact the "only major work certainly completed" in Cairo before his return. 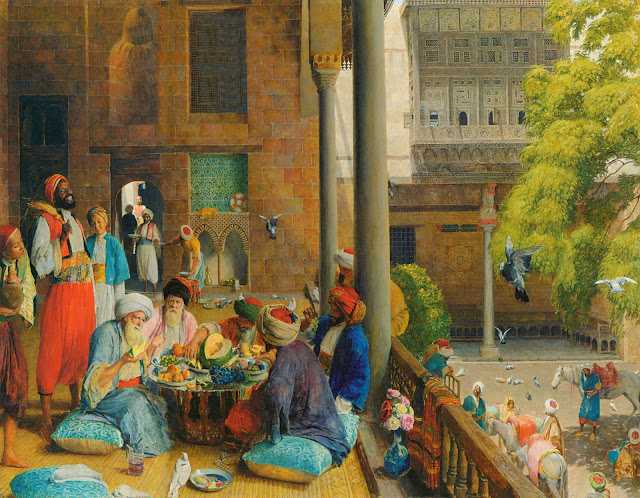 He continued to paint watercolours for most of the 1850s, before returning to painting with similar subjects and style in oils, which were quicker to produce and sold for better prices. 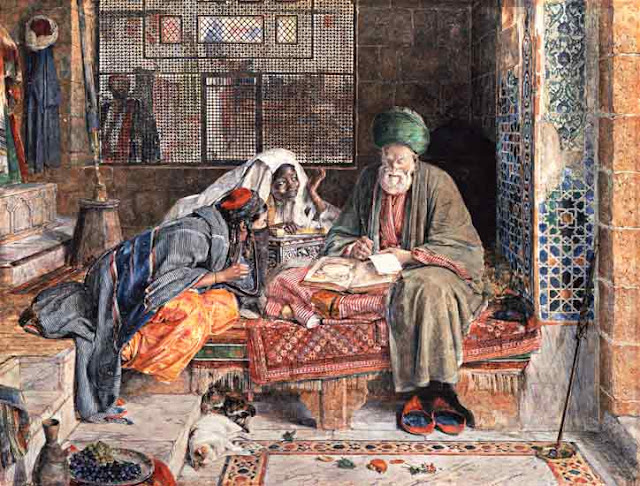 He wrote to a colleague: "Generally in spite of all my hard work, I find water colour to be thoroly  unremunerative that I can stand it no longer—it is all, all always, rolling the stone up the hill—no rest, and such little pay!" 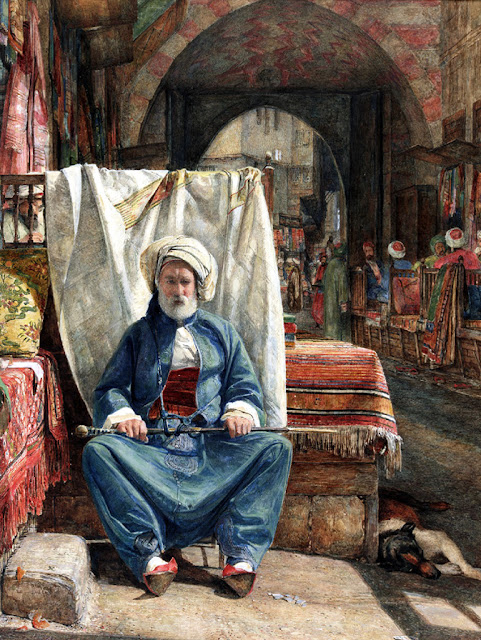 In the 1860s his usual practice was to paint two versions of the same composition, in oils (to exhibit at the Royal Academy) and also watercolour, trying to push the price of the latter up to approach that of the former. In his technique, "Independently of the Pre-Raphaelites, Lewis had evolved a similar method, applying colour with a minute touch on a white ground to produce a glowing jewel-like effect". 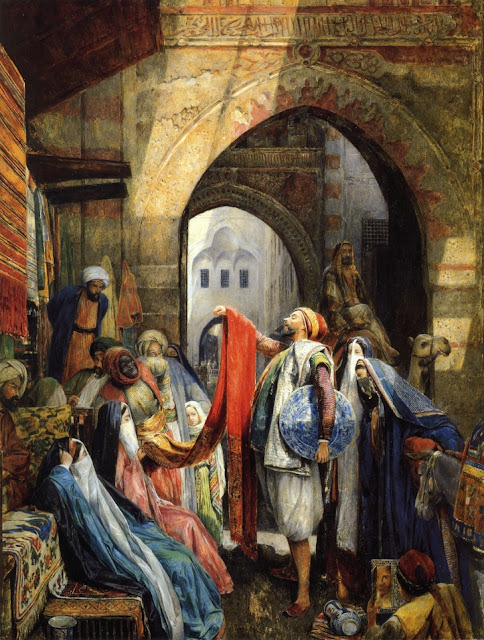 Lewis became an Associate of the Royal Academy (ARA) in 1859 and a member (an RA) in 1865, and was President of the Society of Painters in Water Colours from 1855, though this was just as he was abandoning the technique for oils. The Society did not allow members to exhibit works in oils, which Lewis now wanted to do, and he resigned in 1858. 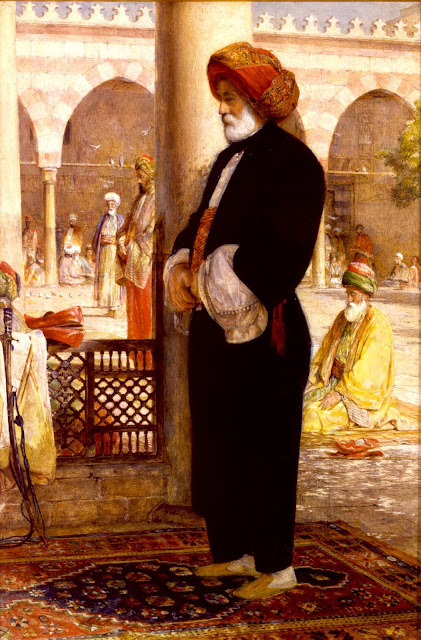 Lewis wrote very little, even letters, and when he was required to address the watercolourists as their president at a dinner in 1855, he stood up and after a while sat down again without saying a word. Partly as a result of the absence of sources, no full biography was published until 2014. Lewis continued to paint and exhibit almost up to the end of his life, but in 1873 he seems to have suffered a crisis in his health from which he never recovered before his death in 1876. After being largely forgotten for decades, he became extremely fashionable, and expensive, from the 1970s and good works now fetch prices into the millions of dollars or pounds at auction. 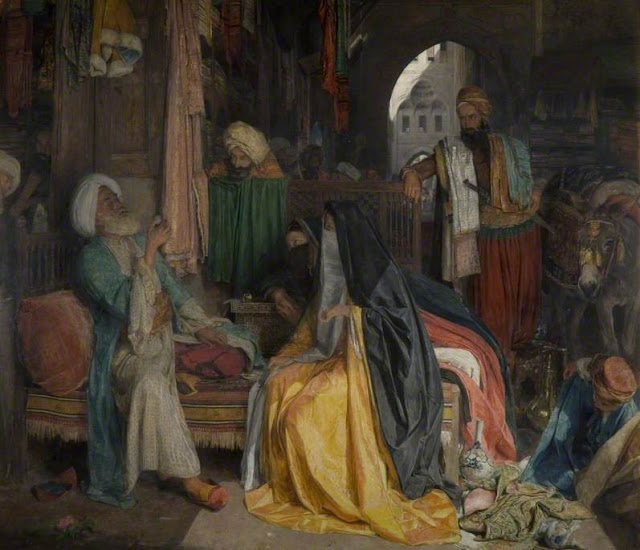 Doubtful coins to the two unweighed underweight suspects, one of which must be a bad coin. 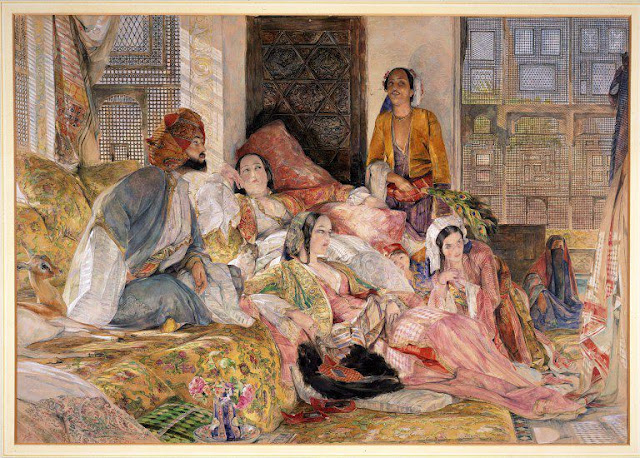 The subject of the watercolour is rather unclear in the Victoria and Albert Museum picture. A photograph of the painting exhibited at the Old Watercolour Society shows the picture extended on the right to reveal another group of figures (Below). This group includes a new member of the Harem being presented to the Pasha (an officer of high rank). This would explain the alert interest of the Pasha and the expressions of the other four women in the Victoria and Albert Museum picture. More Hhareem 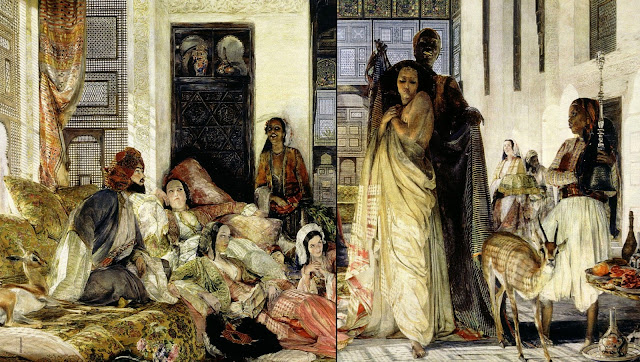 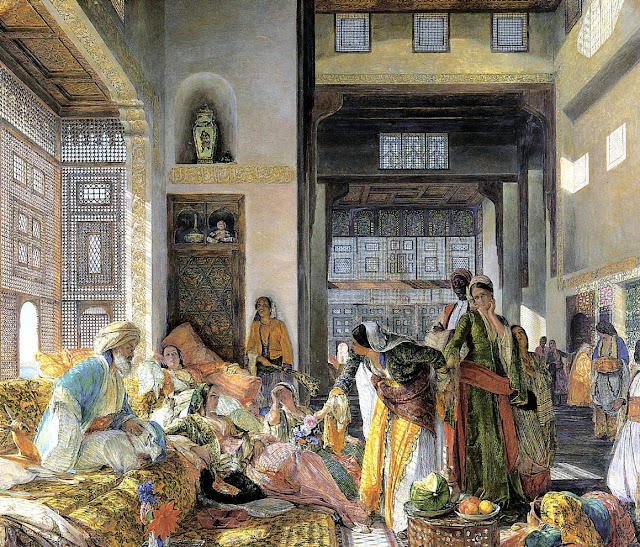